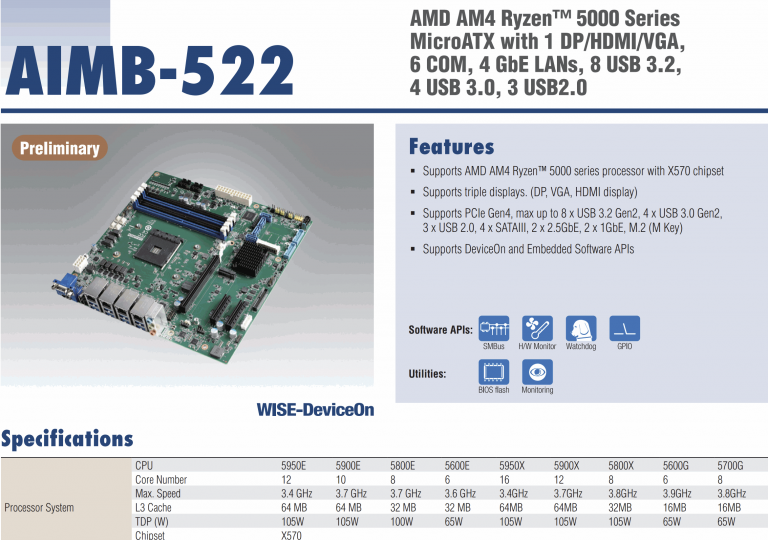 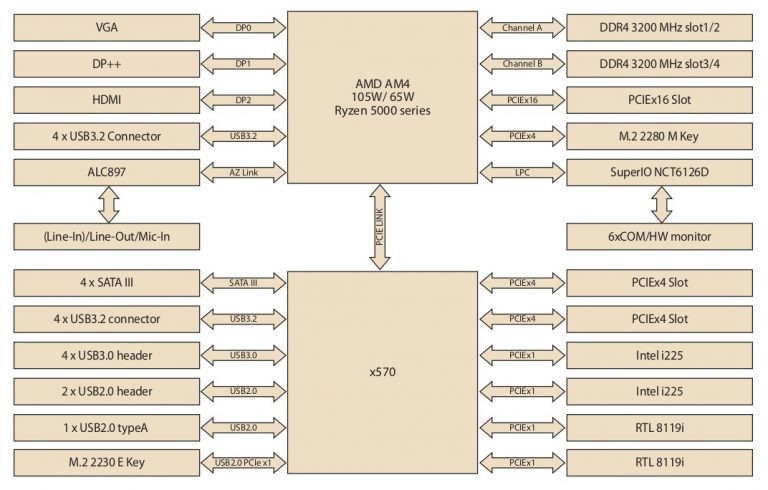 This is the first company to publicly announce the new Ryzen Embedded 5000 series, featuring Zen3 cores and AMD X570 motherboard. The new AMD series feature up to 12 cores and 105W TDP.

The AIMB-522 is a motherboard equipped with one AM4 socket and four DDR4 memory slots. The difference between this and any consumer motherboards is an extensive connectivity options, such as two 10 GbE network adapters and two 2.5 GbE. There are as many as eight USB 3.2 Gen2 connectors, four USB 3.0 GEn2 and three USB 2.0. This motherboard supports Advantech’s DeviceOn, a cloud based remote access and management technology.

The flagship Ryzen Embedded 5950E features 12 cores and up to 3.4 GHz clock (listed as Max Speed, although it is likely a base clock). There is also a Ryzen 5900E which features an unusual configuration of 10 cores. On the other hand, Ryzen 5800E and Ryzen 5600E both feature the same core count as their consumer counterparts: 8 and 6 respectively. Those SKUs operate in the 105 to 65W TDP range, the same range as desktop Ryzen.

The company confirmed that the new Ryzen 5000E series provide 19% IPC gain over Zen2 based series (presumably over Ryzen Embedded V2000 Series). The new Ryzen series feature four SKUs up to 12 cores. The company listed core count, base clock and TDP for each part: Although the press release for AIMB-522 is dated back to June, it wasn’t posted until today. This suggest the series might have been pushed back by 1-2 months.

Off-the-Charts Performance with AMD Desktop Processor Ryzen™ Embedded 5000
AIMB-522 features AMD latest desktop processor Ryzen™ Embedded 5000 with “Zen 3” performance, achieving new levels of processing and power efficiency. The Instructions Per Clock of Zen 3 core is 19% additional performance from every MHz of frequency relative to the previous generation. Likewise, the Zen 3 architecture transitions to a new design that brings 8 cores and 32MB of L3 cache into a single group of resources. Latency-sensitive applications like smart manufacturing, automated visual inspection and intelligent surveillance especially benefit from this change, as tasks now have direct access to twice as much L3 cache versus “Zen 2.” Impressively, the performance gains of the “Zen 3” architecture can be delivered with no increase to power consumption or TDP. With the industry-leading 7nm process, AMD Ryzen™ 5000 Series deliver a 24% generational improvement in energy efficiency, and a stunning 2.8X lead over competing architectures.