According to Weibo user “Venom Warlock Marvin” AMD’s next-gen desktop CPU flagship Ryzen 9 7950X might have support to boost clocks up to 5.85 GHz.

AMD Ryzen 9 7950X 16-core CPU might boost up to 5.85 GHz, which is the limit of the built-in Fmax frequency. This would be the highest frequency for TSMC N5 silicon thus far. To reach F-max, users can use one of the available AMD technologies, such as PBO (Precision Boost Overdrive). This technology increases the power limits depending on sensor data (temperature, power consumption or workload type). 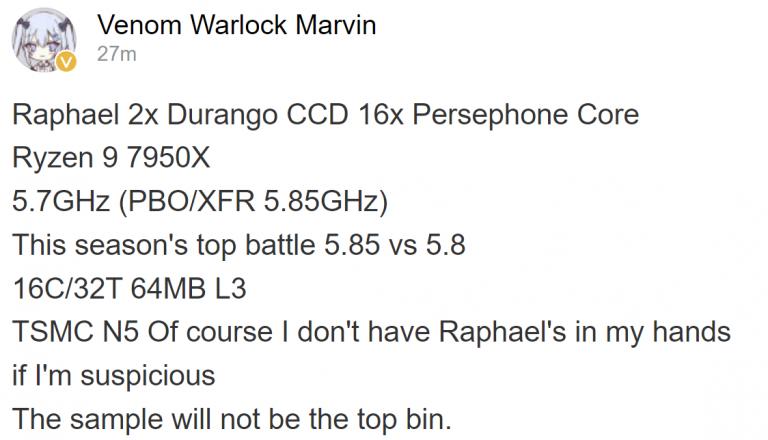 Importantly, for Ryzen 5000 series, the F-max frequency can still be modified with F-max Offset, meaning Ryzen 7000 series can still clock higher unless AMD somehow changed the underlying technology for Zen4 architecture. The F-max frequency of 5.85 GHz was first mentioned by Angstronomics in May this year. At the time, though, this frequency was not attached to any SKU.

The AMD Ryzen 9 7950X is a 16-core CPU featuring Zen4 micro architecture. It reportedly features two Durango CCDs with 16 cores codenamed “Persephone”. The leaker claims that the battle for the top CPUs will be between 7950X’s 5.85 GHz and i9-13900K supposedly boosting up to 5.8 GHz with Thermal Velocity Boost. The sample that was described by “Venom” is not the top bin CPU.

Along with those claims, leaker provided a screenshot featuring Ryzen 9 7950X CPU, which is not yet fully supported by the software. It shows 16 cores with core sped of 4848 MHz clock, but unclear under what workload. We can also see AVX512 support listed in the instructions. 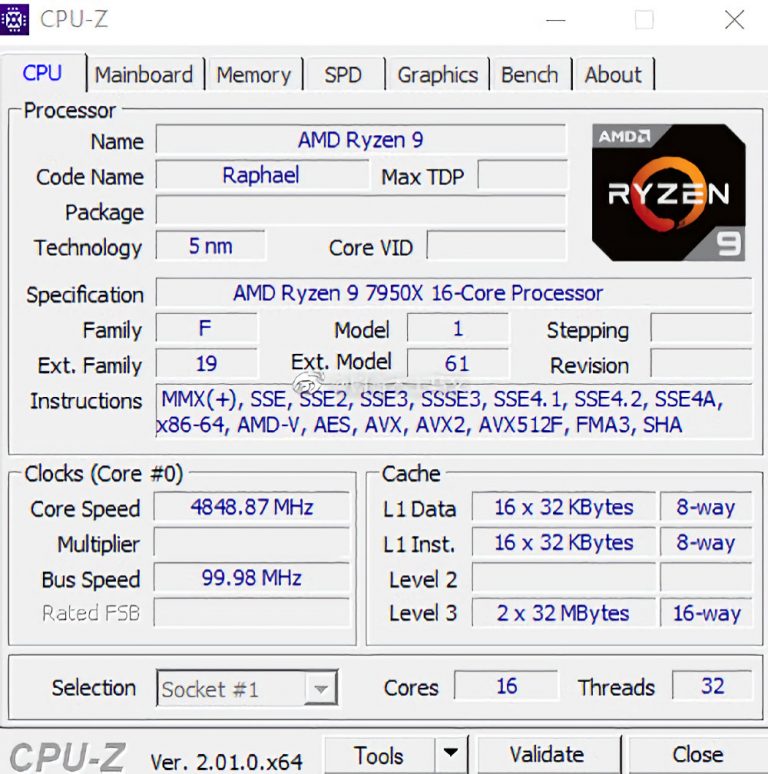 AMD is set to announce its Ryzen 7000 series tomorrow. AMD might not share all the details though, such as PBO/XFR capability for Zen4 desktop, but this information should become available once independent reviews are out in mid-September.