A quick follow-up to the first Ryzen 5 7600X benchmarks on Geekbench, the flagship 16-core 7950X has now been tested as well.

The AMD Ryzen 9 7950X was tested on ASUS ROG Crosshair X670E Extreme motherboard equipped with 32GB of DDR5-6000 memory. The CPU reached maximum boost frequency of 5759 MHz (as per detailed Geekbench data), so a bit higher than advertised boost clock of 5.7 GHz.

This CPU features 16 cores and 32 threads, so just as many as Ryzen 9 5950X from current generation of AM4 desktop series. This is also the same core count as Core i9-12900K CPU (although of hybrid architecture), but also fewer cores than upcoming Core i9-13900K (24 cores). 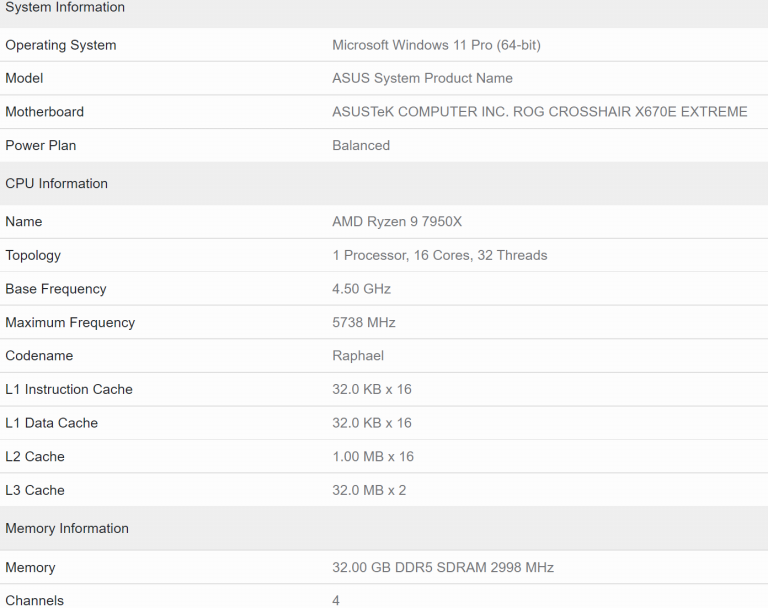 This sample scored 2217 points in single-core test and 24396 points in multi-core. That’s just below the official figure of 2275 points as presented by AMD yesterday.

Since most of the Intel’s upcoming 13h Gen Core have already been tested, we can now make the first comparison of two yet unreleased desktop product series, although some SKUs are still missing.

Therefore, in Geekbench both flagship CPUs are very close to each other in single-threaded test, while Raptor Lake has an advantage of better multithreaded performance due to increased number of cores (doubled Efficient cores).