South African retailer already lists the upcoming next-generation ASUS Zephyrus laptops featuring not only the NVIDIA GeForce RTX 30 Mobile graphics but also AMD Ryzen 5000H series. This is the first confirmation from a notebook maker that the upcoming AMD Ryzen processors for laptops will be paired with the high-performance NVIDIA Graphics, just as the rumor claimed. This generation will no longer be limited to the mid-range RTX xx60 series, the new leak suggests.

ASUS has collaborated with AMD during the previous launch of Ryzen 4000H processors. This board partner was exclusively allowed to sell Ryzen 4900HS CPUs and it appears that the collaboration extends to the next generation as well. A Zephyrus Duo 15 laptop (GX55) appears to feature a Ryzen 9 5900HX CPU and RTX 3080 Mobile, the best of two worlds, one would say. At this moment it is unclear what the X stands for in the product name.

The Zephyrus G14 with an updated Ryzen 5900HS processor is also expected with an RTX 3060 Max-Q GPU. The retailer also lists a Zephyrus G15 model, but with the last-gen Renoir CPU to be paired with NVIDIA Quadro RTX 3000 graphics (the listing does not specify the SKU).

AMD Cezanne-H (Ryzen 5000H) is the new series of mobile processors that will most likely be unveiled by Lisa Su at CES 2021. The processors feature Zen3 core architecture and should provide a noticeable performance improvement over the last generation, which took the stagnant mobile market by surprise.

The Ryzen 9 5900H series is an 8-core and 16-thread CPU, but the company will probably also release 6-core models for more budget-oriented users. Although, from what we have been seeing in the past year, most users would end up with the Ryzen 7 4800H, because the price difference was minimal. 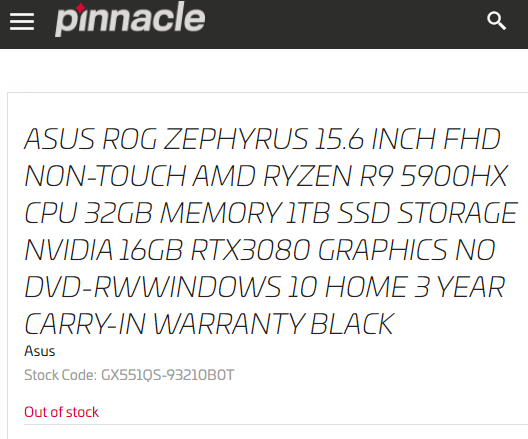 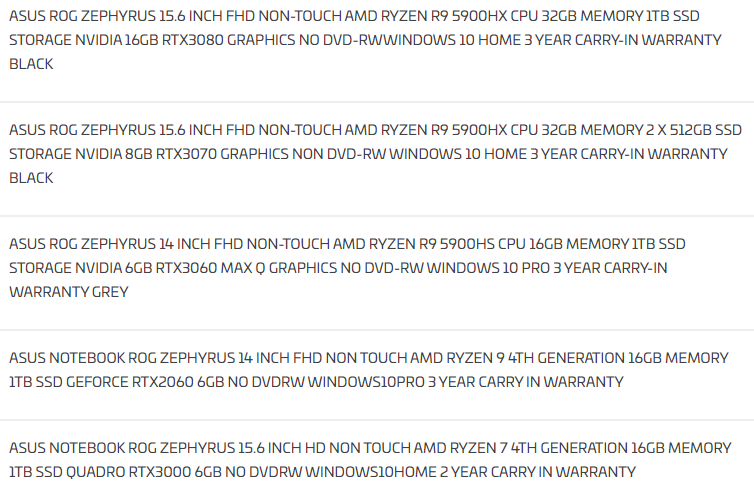