As of this moment, we know about three Ryzen 9 5900 SKUs being prepared by AMD for the grand announcement early next year. At CES 2021, the company is set to unveil its Ryzen 5000 series based on Cezanne APU featuring its latest Zen3 core design. The processors are expected to provide a significant single-core performance upgrade over Renoir based Ryzen 4000 series, similarly to desktop variants, which should be a crucial feature for the power-constrained mobile processors.

AMD Ryzen 9 5900H appears to carry a base clock of 3.3 GHz and a turbo clock going up to 4.65 GHz. Compared to the 5900HX variant, the turbo clock appears to be lower by 50 MHz, while the base clock remains at the same value. We do not know if both SKUs will have a different TDP, but the H variant is more than likely to feature 45W by default.

Compared to Ryzen 9 5900HS, the 5900H appears to be 150 to 200 MHz faster, but that is due to the fact that the former is power limited to 35 watts. However this SKU has not yet appeared on Geekbench, hence we cannot compare the two in terms of performance. 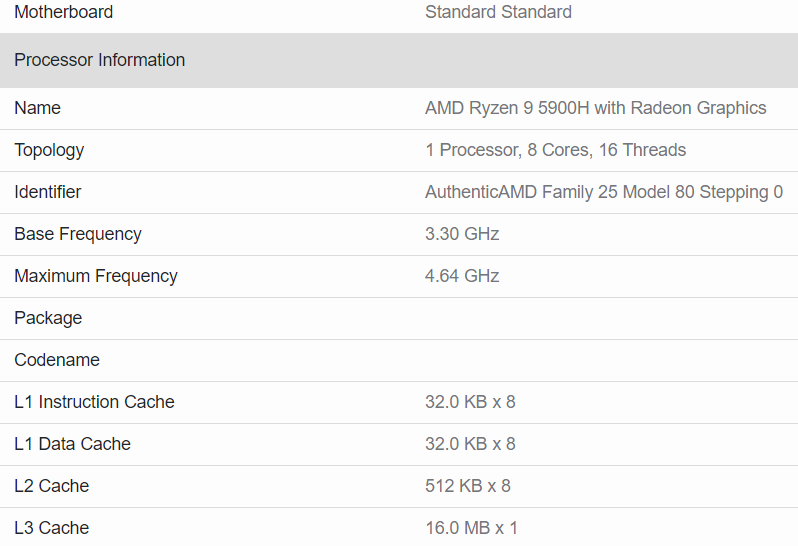 With a single-core score of 1520 points, the CPU is just a fraction slower than the 5900HX, while it is actually faster in the multi-core benchmark by 3.4%. The latter SKU had already appeared a few times before and the score of 9015 points was so far the highest.

More importantly, Zen3-based AMD Ryzen 9 5900H appears to be 25% faster in single-core and 11% faster in multi-core benchmark compared to current-gen Ryzen 9 4900H based on Renoir APU (Zen2). The CPU also appears to be 26% faster than Intel Core i7-10850H in single-core benchmark and up to 33% faster in multi-core. The i7-10850H is currently the fastest Intel Comet Lake-H CPU listed by Geekbench performance charts (both the Core i9-10980HK and 10885H are not present there).

The Ryzen 9 mobile CPUs have not really been available to that many customers, as they were limited only to certain notebook models. Most mobile Zen2 users have ended up with Ryzen 7 4800H instead. It is unclear if the binning process for the next-generation Ryzen 9 series will allow a broader availability of this new SKU.

We still do not know much about all three variants of the Ryzen 9 series. The HS had only appeared in retailer’s listing for ASUS ROG Zephyrus laptop (the HS variants are exclusive to ASUS).