Update: As expected, AMD has removed the mention of overclocking support.

AMD unlocks OC for Ryzen 7000X3D or this is just another mistake?

AMD product pages may sometimes be quite misleading. The pages for Ryzen 7000X3D already made the news earlier this month when AMD had updated them with a February 14th launch date, only to confirm later it was a mistake. A few weeks later, we still do not know when AMD is planning to launch these CPUs exactly, but the product pages are still being updated.

As it turns out, AMD has just listed Ryzen 7000X3D with overclocking support. All three of the upcoming SKUs are now listed with ‘Unlocked for Overclocking: Yes”. This usually implies that the CPU supports base clock overclocking, just as the rest of the Ryzen 7000 series release to date. 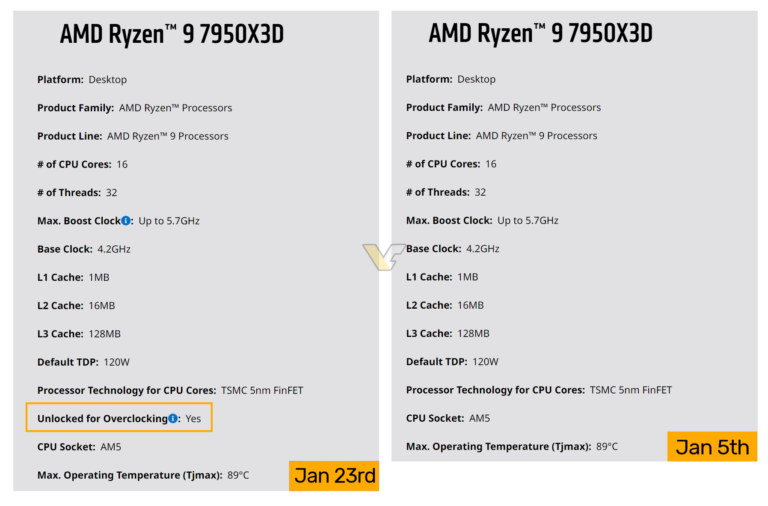 Thus far AMD only confirmed it will support automatic overclocking through its Precision Boost Overdrive technology. Furthermore, the 7000X3D series are to support Curve Optimizer. These features which will undoubtedly improve fine-tuning options for 7000X3D series, were not enabled on Ryzen 7 5800X3D with Zen3 3D V-Cache technology.

The company did not mention direct overclocking support for Ryzen 7000X3D at any point thus far, which is why this update to the product page is more than likely another mistake.

Officially, Ryzen 7000X3D series are to launch in February, but AMD is yet to confirm prices and the exact date when would such launch happen. With so many mistakes before this launch, it is probably better sooner than later.