AMD is downsizing its desktop Raphael for laptops. This is a direct response to Intel’s Alder Lake-HX series, which are essentially desktop-class 16-core CPUs redesigned for the mobile BGA socket. Such processors prioritize CPU power at the cost of fewer GPU cores.

AMD Dragon Range series are designed for “Enthusiast Gaming” laptops, which essentially means that a discrete GPU is still required. Therefore, two RDNA2 Compute Units will not provide enough horsepower for any gaming workload, but in combination with external graphics it should be a good compromise. 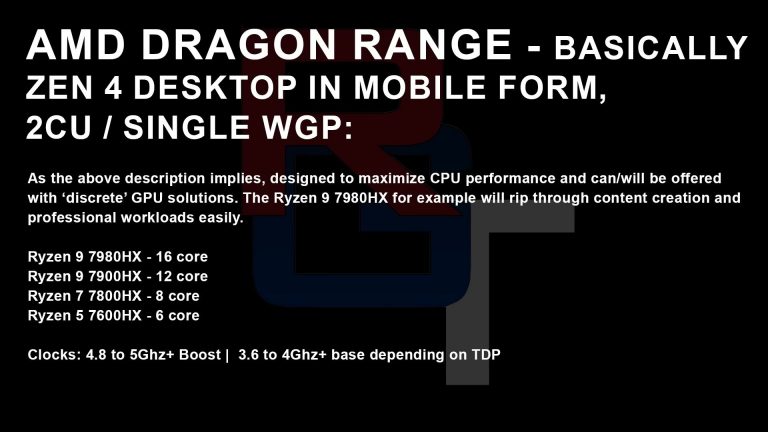 According to RGT, four SKUs should now be expected. The flagship Ryzen 9 7980HX would sport 16 cores, the highest CPU core count ever for an AMD mobile CPU. Additionally, a 12-core 7900HX would also be a part of Ryzen 9 series. Meanwhile 8-core and 6-core 7800HX and 7600HX CPUs would occupy the mid-range series. All these CPUs are to feature two RDNA2 compute units. Boost clock speeds should range from 4.8 GHz to 5.0 GHz and maybe even higher.

AMD Phoenix is a different beast than Dragon Range. The architecture does still rely on Zen4 x86 core architecture, but only half of the cores are available in comparison to the higher performing Dragon. These series will prioritize lower power consumption and more capable graphics.

Phoenix is officially targeting 35 to 45W power range, and it is designed for thin and light gaming laptops. RGT is reaffirming previous rumors that these series will have integrated GPU designed in RDNA3 architecture, an upgrade over Dragon Range. Furthermore, there will be 6 times more GPU cores than Dragon, reaching up to 12 Compute Units (6 WorkGroup Processors). This means that configurations with 1536 Stream Processors are to be expected. 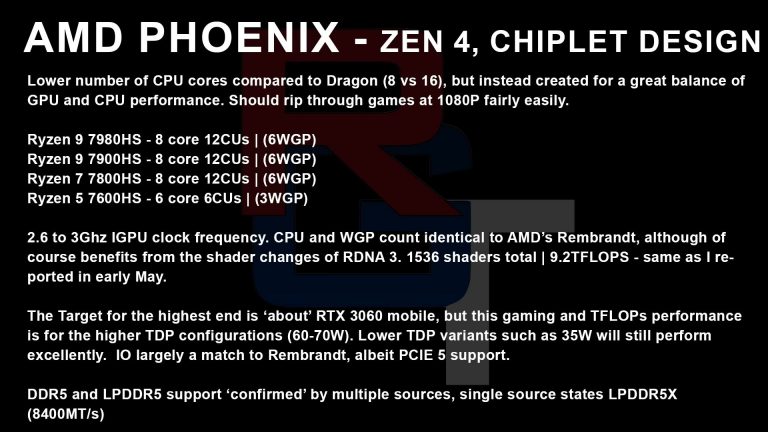 It is also said that the iGPU clock speed may end up in 2.6 to 3.0 GHz range. This gives a maximum theoretical compute performance of 9.2 TFLOPs. Rumors circulating earlier have put Phoenix graphics at a level of NVIDIA GeForce RTX 3060 Max-Q graphics. In that were the case, this iGPU would be more than capable for gaming and that’s without discrete graphics.

RGT expects four SKUs, including Ryzen 9 7980HS, 7900HS, Ryzen 7 7800HS and Ryzen 5 7600HS. Those “HS” SKUs would feature exactly the same number of cores as Ryzen 6000 “Rembrandt”, but designed in newer architecture and with better graphics.

The leaker also posted a proposed design for this chip. It is said to look similar but not identical to the actual silicon. This APU would be AMD’s first chiplet design for laptops, featuring Zen4, RDNA3 and Memory (Infinity Cache?) modules separately in a single package.