AMD is adding Pro SKUs to its Ryzen 5000 Mobile sieres

As discovered by APISAK, AMD might soon launch its new PRO series for business laptops.

Last year, AMD introduced three Ryzen PRO 5X50 SKUs, which were all based on the same gaming-oriented non-PRO variants. The PRO series feature AMD Pro Technologies such as Memory Guard, a system memory encryption in case a laptop with sensitive business data is stolen. Those CPUs also support Microsoft Endpoint Manager for cloud management. Clearly, those CPUs are targeted for businesses where AMD is slowly trying to gain more market.

The Ryzen 7 PRO 5850U processor which has leaked on UserBenchmark appears to be based on already launched Ryzen 7 5800U. According to the UB data, the CPU has a base clock of 1.9 GHz, which is identical to the Ryzen 7 5800U. The software does not list turbo frequencies but instead claims that the CPU ran at 3.65 GHz on average.

Thankfully, the HP website provides the missing data, such as a boost clock of 4.0 GHz. That said, we are looking at duplicated specifications for the 5850U and 5800U series. Neither site provides information on the graphics subsystem, but one would guess that those will remain the same on both models. 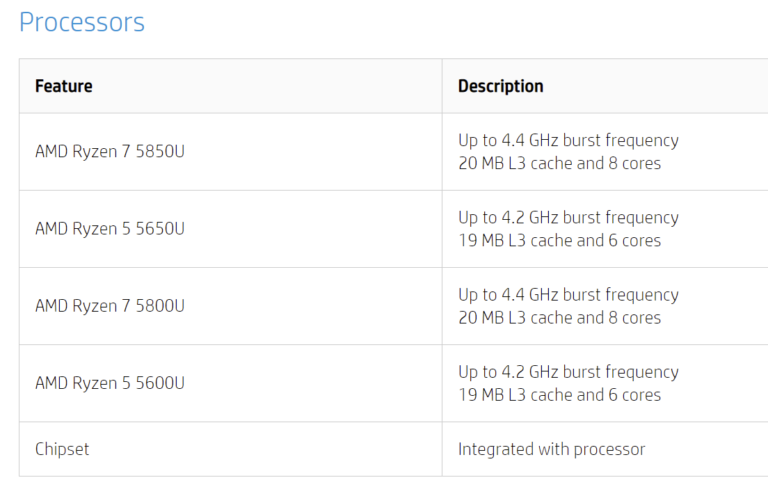 AMD has not announced its PRO 5000 Mobile processors yet, so it is unclear how many more SKUs there are. However, the leak from HP also confirms 5650U, which copies the specs of 5600U, but still adds AMD PRO Technologies.