This might be the first preview of the new Ryzen 5000U CPU from a reputable source. Uniko’s Hardware has received a tip featuring AMD Ryzen 7 5800U in GPU-Z and Cinebench benchmarks.

AMD is set to announce its Ryzen 5000 series featuring Zen3 core design next week. The company is expected to unveil its U-Series with a nominal thermal design power (TDP) of 15W and high-end gaming H-series with a default TDP of 45W. The Ryzen 7 5800U belongs to the first group. This CPU will be based on Cezanne APU, unlike some of the CPUs in this particular series. It was rumored that SKUs such as Ryzen 7 5700U, for instance, could be based on Zen2 core design instead. Those chips will be codenamed Lucienne, which is considered a refresh of Renoir.

The Ryzen 7 5800U is an 8-core and 16-thread CPU with a base clock of 2.0 GHz and a boost clock of 4.4 GHz. Compared to the current series the Zen3 based APU will have twice as large L3 cache of 16MB. The CPU is to offer a 200 MHz higher base and boost clocks compared to its predecessor.

In CPU-Z software, the CPU scored 592 points in a single-threaded benchmark and 3812 points in a multi-threaded workload. The multi-thread score may not be very impressive, but the single-thread score of 592 points puts this CPU even higher than the current mainstream desktop flagship from Intel, the Core i9-10900K, which scores 584 points (according to official CPU-Z charts).

When it comes to multi-threaded score, there clearly appears to be a problem with SMT. Even the Ryzen 7 4800U scores at 5K points, so it is safe to assume that either SMT does not work, or this particular notebook has a BIOS which is not yet fully supported.

The Ryzen 7 5800U scores 509 points in Cinebench R20 ST and 3614 points in MT. In Cinebench R23 the CPU scores 1311 and 9326 points respectively. A quick comparison reveals that the CPU is 6% faster in the single-threaded benchmark while also being slower than 4800U (according to Notebookcheck). 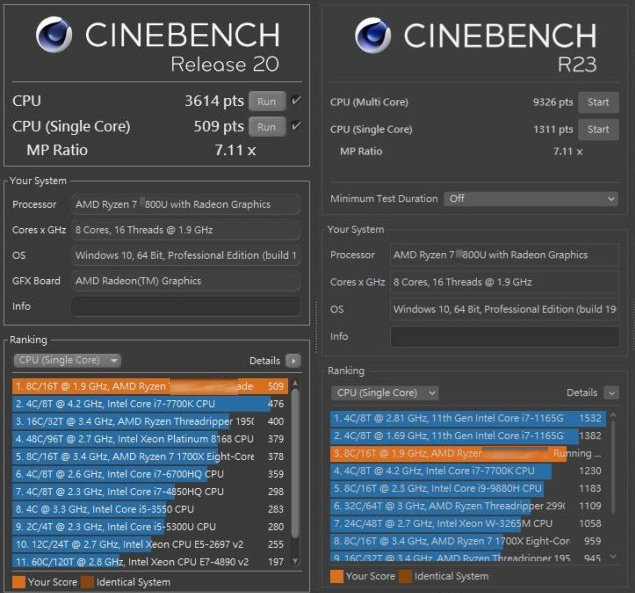