AMD Renoir with 8 cores and 8 CUs for DESKTOP

So here it is, the Ryzen 7 4700G APU we have been seeing in numerous leaks over the past month.  Our source claims that the product is a final version and it shouldn’t be long before we see Renoir AM4 in stores. This marks the moment when AMD enters a new market segment, high-performance APUs. So far only 4-core/8-thread APUs were available with up to 11 Compute Units.

AMD and Intel have taken different paths with their “Matisse” and “Comet Lake-S” series. AMD decided not to integrate graphics in the mainstream CPUs. This has surely simplified the lineup and allowed AMD to focus entirely on the Zen design. The integration of the CPU and GPU is always tricky and for that reason, we have still not seen any Navi APUs, as all Ryzen “G” series APUs are based on Radeon Vega.

Intel, on the other hand, still adds GPUs to the entire “S-Series” stack, even to the highest SKU in the lineup (aka i9-10900K). However the design of the Gen9.5 graphics has not changed in years, it is simply a refreshed and renamed product with 192 cores.

The 4700G is an AMD Renoir silicon based on Zen2 architecture (7nm). The current-gen 3x00G series is based on “Picasso” silicon with Zen+ cores (12nm). On paper, bar the obvious core-count upgrade, the new CPU appears to offer higher clocks for both the CPU and GPU cores.

The major difference is the GPU core count, as the new silicon only offers up 8 Compute Units. The previous generation went up to 11 CUs. AMD has already explained this during Mobile Renoir launch, that despite fewer CUs, graphics performance is still better due to various optimizations – GPU clock being the most obvious one.

Earlier this week igor’sLAB leaked the OPN list of the AMD Renoir Desktop processors. That list included the CPU we are covering today. It listed an OPN code of 100-000000146, the exact same the Ryzen 4700G has: 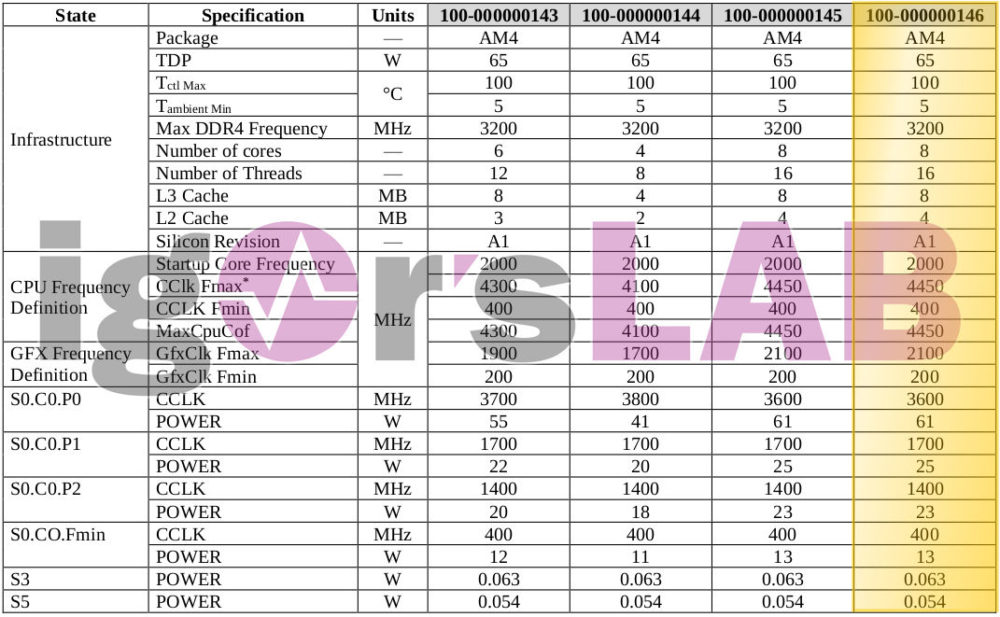 You may want to check our Xeon W-1200 coverage where we posted a list of ALL Comet Lake CPUs in a visual pleasing chart. It’s a good overview of what is Intel currently offering in for the mainstream market.

The performance? We don’t have any details on that yet, bar the previous leaks, but we will keep you updated.