Leaker ‘vegeta’ has revealed the AMD notebook product roadmap for next year.

The roadmap reiterates some of the rumors that have been floating around the web for the past few months. AMD Rembrandt-H will launch in 2022 on the new FP7 socket. The roadmap confirms it would utilize a 6nm fabrication process as well as the new Zen3+ core architecture. These 45W TDP processors are to support PCIe Gen4, LPDDR5, and DDR5 memory as well as USB4. A low power (15W) Rembrandt-U variant is also to be expected featuring identical specifications.

The leaked slide also confirms Van Gogh and Dragon Crest. This is the first time we learn the exact purpose of these APUs. Both were to be used for ‘premium form factors’, which are illustrated as tablets/handheld devices. What is important to note is that according to Vegeta, Van Gogh has been canceled, so the roadmap is clearly not showing the latest data. Otherwise, there wouldn’t be much of a difference between Van Gogh and Dragon Crest, the latter appears to some sort of a refresh of Van Gogh. These premium APUs would feature Zen2 cores and Navi2 integrated graphics. They would still rely on the 7nm fabrication process and operate at 9W. Interestingly those would also support LPDDR5 memory.

AMD is also to launch Barcelo-U, which appears to share specs with Cezanne-U. AMD already did a similar thing with Lucienne-U, which was essentially a copy of Renoir-U. AMD did confirm though that there are physical changes to the silicon, which meant that we shouldn’t call it a refresh or a rebrand. The same principle is likely to apply to Barcelo/Cezanne.

AMD Rembrandt, Dragon Crest, and Barcelo are all 2022 products. AMD is likely to make the first next-gen notebook announcements a year after Cezanne was announced, which was at CES in January. 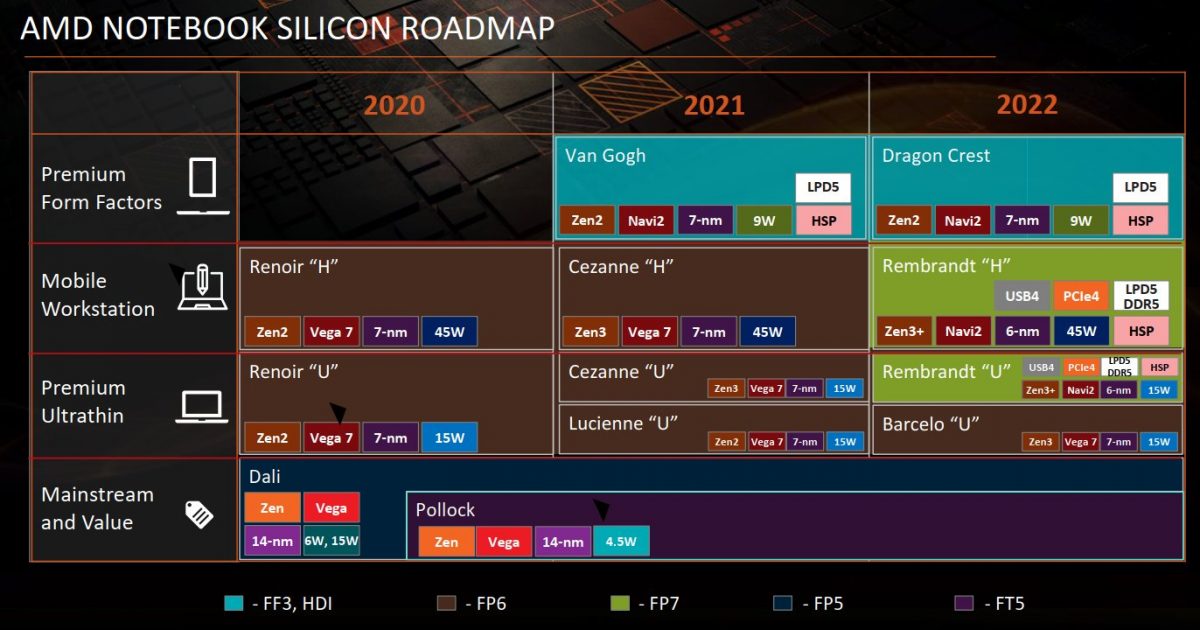