AMD is set to announce its Cezanne CPUs in just 3 weeks at CES 2021. The company will unveil its low-power and high-end mobile series known as Ryzen 5000U and Ryzen 5000H.

The 6-core CPU known as Ryzen 5 5600H had already appeared in a leak earlier this month. The CPU was rumored to feature a 3.0 GHz base clock and a 4.1 GHz boost clock. However, thanks to the new entry discovered by APISAK, it appears that the CPU is in fact clocked higher. The Ryzen 5 5600H would feature a 3.3 GHz base clock and a boost of 4.24 GHz, according to the Geekbench result.

The processor has been tested with a TIMI laptop which appears to be a codename for Xiaomi Mi Notebook. 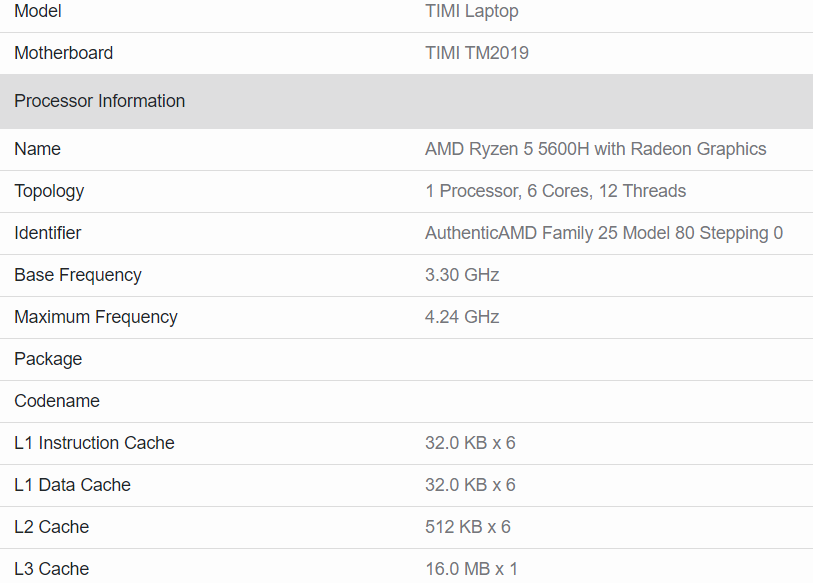 The processor appears to be 37% faster in single-core benchmark and around 18% faster in multi-threaded compared with the current-gen Renoir Ryzen 5 4600H processor. The main competitor for the 5600H is the 10th Gen Core i7-10750H CPU, which Intel will be reusing for the budget GeForce RTX 30-based laptops. AMD’s new 6-core CPU appears to be 20% and 3% faster in single-core and multi-core benchmarks respectively, according to Geekbench’s own performance charts.

It appears that Ryzen 5 5600H will be slower than 11th Gen Core Tiger Lake CPUs that will also launch next month. Those processors, however, will be limited to four cores till the Tiger Lake-H series will be announced. Intel’s i7-11370H appears to be 14% faster than 5600H, but at the same time only offer 45% of the 5600H multi-core performance.

So far we have only heard about four Cezanne-H parts, namely 5900HX, 5900HS, 5800H and the 5600H. AMD is not expected to launch more parts except for the variants of these CPUs.