Igor Wallosek has shared a new block diagram for the Ryzen 4000H and U series platform codenamed Renoir FP6. The diagram reveals the sad truth about PCI-Express interface bandwidth limitation. This could be the main reason why notebooks makers have avoided pairing high-performance Ryzen 4000 CPUs with more powerful graphics.

The Renoir FP6 is locked to PCIe 3.0 with either x8 or x4 link. This is not a huge difference performance-wise, but it definitely is a considerable factor when it comes to mobile graphics, where each SKUs only offers a small percentage advantage over the lower-end model. There are quite a few tests available showing the actual gaming performance for different PCIe generations, such as TechPowerUP coverage. The difference can be observed especially in 1080p resolution, which happens to be the most popular one among gaming laptops.

It’s worth noting that desktop Ryzen 4000G series are not limited to x8 link. The Renoir AM4 series offers a total of 24 lanes from which 16 are exclusive for the graphics. The x8 cap is only for the mobile series. 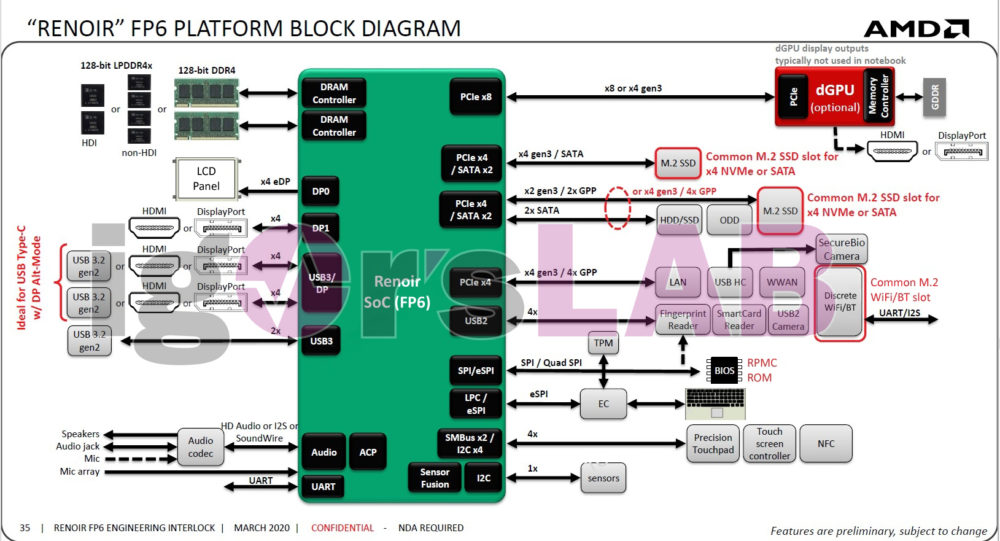 Igor has already touched upon a topic of a lack of better high-end GPU options for Renoir laptops (definitely worth a read). The conspiracy theories floating around have every little to do with simple facts. After all, no one is blocking OEMs from using Radeon RX 5600M and RX 5700M graphics cards, yet only Dell released G5 15 with RX 5600M and Alienware R3 with RX 5700M as an option. No other brand has announced such laptops. The fact that both Radeon graphics cards were announced in January, chances for more laptops with these graphics are very low at this point.

The high-performance graphics card performance for AMD laptops will definitely happen at some point. But for now, these are uncharted waters for notebook makers and all that is needed right now is AMD support and time to validate and test.

AMD Ryzen H series need time to mature and notebook manufacturers need time to adopt AMD technologies. Eventually, we will be seeing more high-end GPU options, but they might not be based on AMD Navi 1x and NVIDIA Turing.

According to Igor, who is citing OEM sources, Renoir’s successor – Cezanne, is also capped to x8 link. Not much is known about Cezanne yet, but if this is the case then we might need to wait much longer.