Given the name of the processor, this should be the 8-core variant of Zen4 desktop CPU with 3D V-Cache. The slide does not confirm the specs or how much cache is added to the CPU, however it does show the improvement over last-gen Ryzen 7 5800X3D CPU. 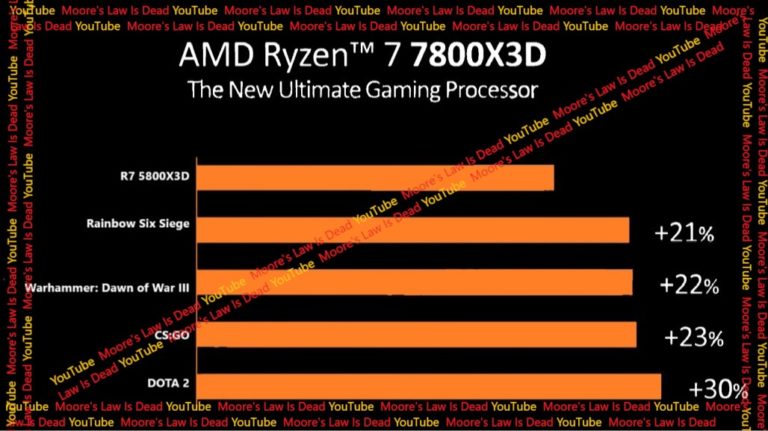 It is shown 7800X3D would be 21% to 30% faster in four games that were used for the comparison. Those are popular esports titles that are typically playable at very high framerates, so probably not a bad choice for such comparison. However, whether those AMD-picked games are a good presentation of the AMD 3D V-Cache in Zen4 architecture, it is simply too early to tell.

AMD is to announce new desktop and mobile CPUs in just a couple of hours at CES 2023 opening keynote hosted by CEO Dr. Lisa Su, so we are likely to hear more from AMD on this technology in Zen4 CPUs. Right now it is unclear if there are X3D CPUs with more than 8 cores planned.

#AMD is preparing an R7 7800X3D that lines up perfectly with the Zen 4 V-Cache performance I leaked last year in the following video🎉https://t.co/dvuuNg3Rjy

P.S. And yes, I manipulated this picture heavily to provide extra protection to a source…just like with the Titan ES. pic.twitter.com/HSDyuPZFV4