According to 热心市民描边怪 “Enthusiastic Citizen“, a tech leaker known from Bilibili and Chiphell social platforms, AMD is now preparing its new series of Ryzen processors for launch. Those should be considered a direct response to the just-released Intel Alder Lake non-K series.

It goes without saying that AMD is in trouble with its low-end to mid-range products. With the release of 65W Alder Lake CPUs, the blue team took the indisputable lead in the cheap processor segment, often offering better performance than AMD’s more expensive 6-core CPUs. AMD is in a tough spot because the company did not launch any quad-core Ryzen 5000 series on Vermeer silicon, only on Cezanne but even those are hard to come by (Ryzen 3 5300G is OEM only). There were also Ryzen 5000 PRO series but those are not targeted at consumers.

As it turns out AMD’s solution to this problem has been cooking for a while now, as the first leaks of the rumored Renoir-X APUs have emerged many months ago. Those are Zen2 based processors on Renoir APU silicon, but with the integrated GPU disabled. Their specifications were just posted by the leaker on Bilibili, but the leaker is unsure about the product names. 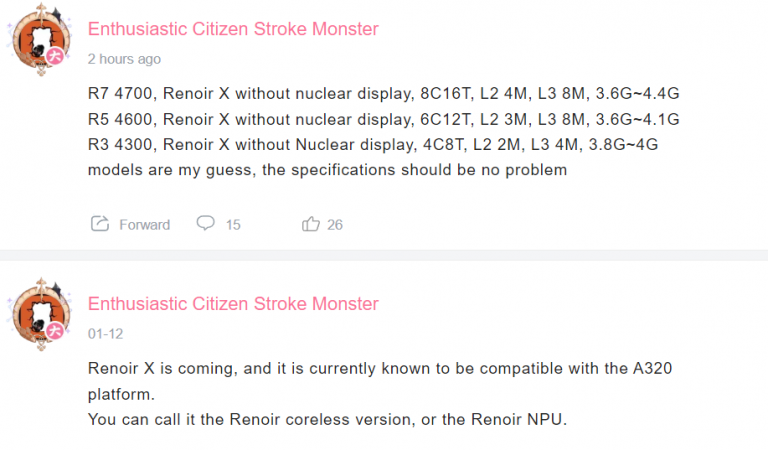 It appears that only the rumored Ryzen 5 4600 would be lower frequencies than 4600G by 100 MHz. The reason for this is unknown. One would have guessed that by disabling the graphics the clocks would actually go higher, but we do not the TDP specs of those CPUs yet.

First traces of Ryzen 4X00 CPUs can be traced back to July 2021 where parts such as Ryzen 5 4500, Ryzen 3 4100 were listed at the USB certification office. AMD made no public announcements bout Renoir-X at CES 2022 and at this moment it seems AMD is preparing for a quiet launch at unspecified date.