Update: AMD has republished the blog post after the backslash from the community.

KitGuru noticed that AMD is suddenly not considering 4GB as a problem for games. As the company surprisingly removed its 2020 blog entry covering this problem.

This is seemingly no longer a problem in 2022, as AMD removed its blog entry claiming just that. This happens right before introducing 4GB Radeon RX 6500XT with 4GB VRAM.

AMD is leading the industry at providing gamers with high VRAM graphics solutions across the entire product offering. Competitive products at a similar entry level price-point are offering up to a maximum of 4GB of VRAM, which is evidently not enough for todays games. Go Beyond 4GB of Video Memory to Crank Up your settings. Play on RadeonTM RX Series GPUs with 6GB or 8GB of VRAM and enjoy gaming at Max settings.

The RX 6500XT is the first 4GB model based on RDNA2 architecture. It launches today at 199 USD MSRP and nearly twice the price at retailers. This is a low-end GPU based on 6nm Navi 24 GPU which was clearly targeted for low-end laptops. However, due to still ongoing shortages, AMD made a decision to use this GPU for the desktop X500 series as well.

The blog post that suddenly disappeared from the AMD Community website was part of the Radeon RX 5500 XT 8GB marketing campaign. Its successor based on newer RDNA architecture will not be available with this capacity. 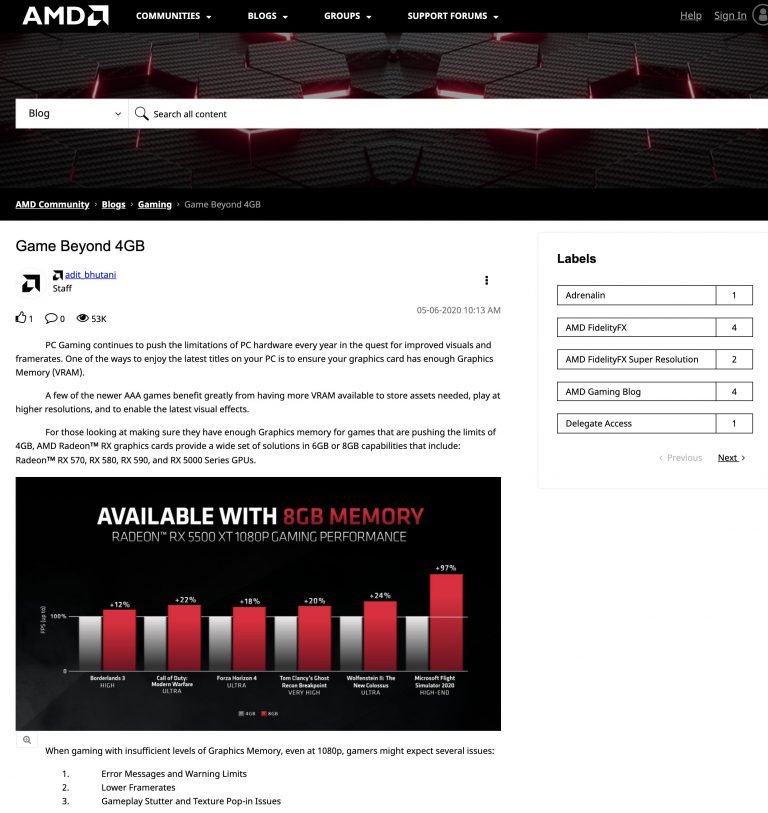