Some new information on AMD next-gen RDNA3 series has been posted and immediately retracted from Linux code.

The calm before the storm. It has been relatively quiet in terms of leaks for RDNA3 architecture. However, it appears that AMD themselves made a surprising commit to AMDGPU Linux drivers, which has been immediately spotted by Kepler and other leakers.

The patch lists MCD_INSTANCE_NUM which is a number of supposed Memory Complex/Controller Dies for RDNA3 Navi 31 architecture. Interestingly, just a week later AMD replaced MCD with UMC_NODE, seemingly to hide the leak.

If this is true, then this would confirm previous rumors that Navi 31 has a single GCD (Graphics Complex Die) and six MCDs. Ultimately this means that the card has a 384-bit memory bus and most likely a total of 192 MB of Infinity Cache or 384MB if AMD were to use V-Cache on top of each MCD as suggested by Kepler.

Therefore, proposed Navi 31 GPU designs posted as early as May this year are slowly finding their confirmation. This of course is just a block diagram the sizes are not confirmed yet. 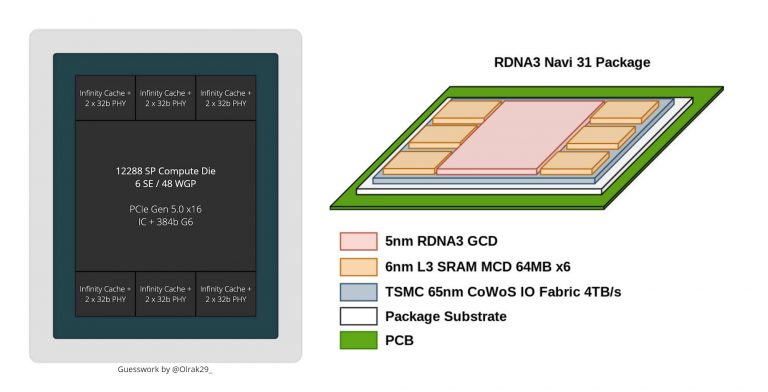 With 384-bit memory bus and GDDR6 memory running only at 18 Gbps, the bandwidth for flagship Radeon RX 7900 series could reach as high as 864 GB/s, 50% higher than RX 6950XT. This value does not include the Infinity Cache’s bandwidth. Furthermore, Infinity Cache size of 192MB would be 50% larger than Navi 21.