AMD Raise The Game bundle goes live after a month – Saints Row, Sniper Elite 5 and Forspoken are out for grabs

This is a follow-up to those waiting for a new Radeon graphics card game bundle to go live.

On May 10th AMD announced it will add free games to select purchases of Radeon RX 6000 graphics cards. A bit later, AMD confirmed which games will be included, but as it turns out, the company added a third game to the stack.

AMD is giving away Saints Row, Sniper Elite 5 and Forspoken games. Interestingly, it’s not just one game, but up to 3 games depending on the model. Purchases of Radeon RX 6900/6800 and 6700 series (including the xx50 refresh) will get all three games. The mid-range RX 6600 series are eligible for two titles: Forspoken and Saints Row, while Navi 24-based RX 6500 and 6400 series will be bundled with Saints Row only.

The promotion runs from May 10 to August 13. Coupons already received can be claimed before September 13 this year. 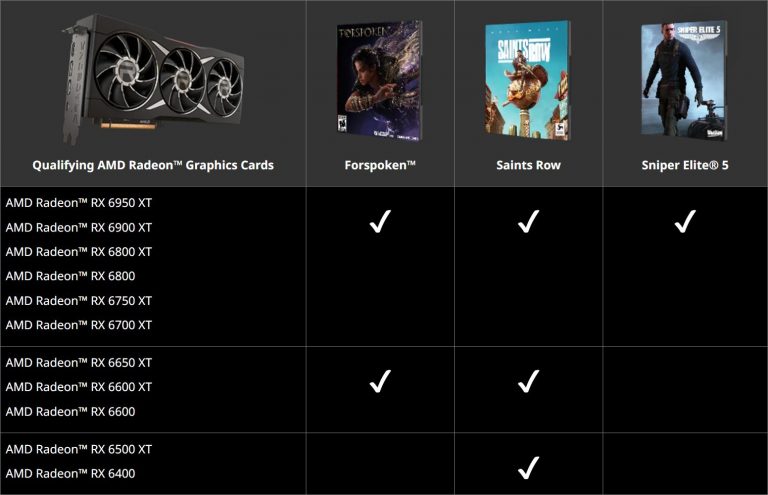 Please note that not all retailers are included. Potential customers should look for offers clearly labeled with the new bundle. The most recent list of participating retailers was listed here, but this is not the updated list.