The rumors about very high clocks on Navi 31 GPUs were wrong, but is there any chance we will see a high clock on custom RX 7900 graphics cards? According to PC World who were invited to the AMD RDNA3 launch event, the company said they designed Navi 31 GPU to scale up to 3.0 GHz, which is much higher than official clocks for RX 7900 series.

YouTuber ‘coreteks’ claims to have some information on the subject. With the preliminary drivers, board partners are only seeing 3% overclocking potential with custom Radeon RX 7900 series. This is indeed low, but it will probably be higher with the final drivers.

Some people asked during the stream so I asked AIBs and they are saying about only 3% OC over the XTX with preliminary drivers (that have been used mostly for thermal testing, to be fair). If true then it looks like the XTX is already close to maxed out 😢 pic.twitter.com/X9E7EbSwIQ

Unfortunately, no board partner except ASUS has unveiled their custom cards yet, and this brand does not even provide any clocks for any of their ‘factory-overclocked’ models: 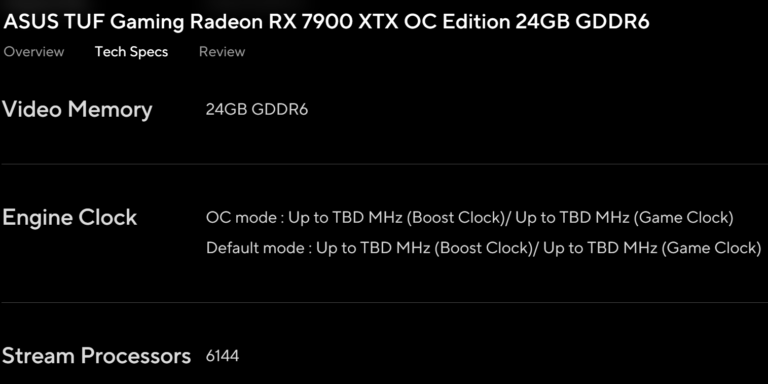 And since we are at it, AMD should clarify how we are supposed to list Stream Processor count for Radeon 7900 series. Both AMD and board partners are now showing 6144 cores for the top part, while almost every media outlet claims it is 12288, for a good reason.