We recently reported on Radeon RX 6900XT going for less than 700 USD and 740 EUR. Turns out, just a week later, this price has gone even lower.

Before we go into the details, one must mention that these are not official price cuts on Radeon RX 6900XT GPUs. On the contrary, those are limited deals from known retailers, namely German Mindfactory and Amazon US/Newegg.

The Radeon RX 6900XT has finally dropped below 699 EUR. A limited sale of 120 Radeon RX 6900XT from ASRock is now running on Mindfactory. This actually the cheapest Radeon RX 6900XT according to price comparison site Geizhals (at 749 EUR), though the retailer is reducing the price by another 50 EUR through its MindStar program. The historical lowest price for this card was 710 EUR, while in January it was as high as 1540 EUR.

The deals are also spreading among US retailers. Amazon US has price-matched Newegg offer from last week. The XFX SWIFT 319 is now sold at 669 USD, which is even cheaper than the same card sold by the official store at Newegg. This is a sleek triple-fan design with three fans and 2.7-slot cooler. If you are looking for a different model at this price, Newegg also has ASRock Phantom at 669 USD. 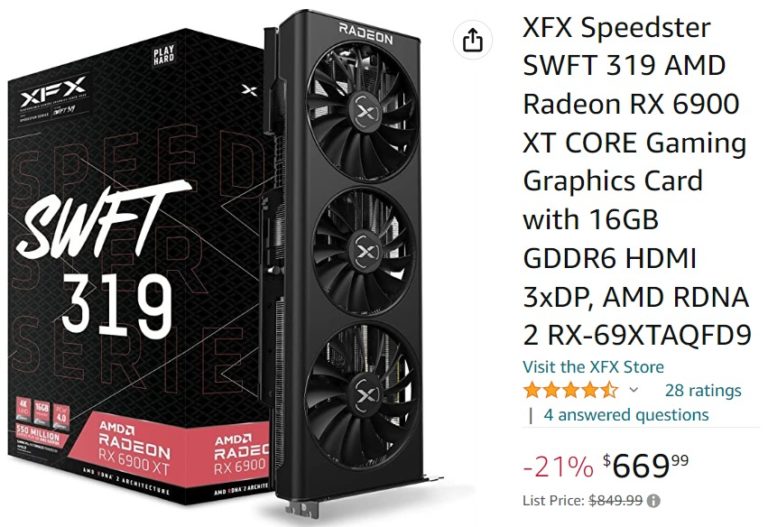 What these deals show is a clear trend of high-end Radeon GPUs becoming cheaper. Just weeks ahead of the expected AMD high-end Navi lineup update. Not to mention NVIDIA releasing its GeForce RTX 4080 next month as well. Similar deals can be found for RX 6950XT cards, but they are not as great as for the 2020 model.