AMD has recently added Adobe Premiere Pro results to its official Radeon RX 6900 XT website. For Adobe Premiere Pro results, the company used PugetBench benchmarking software provided by Puget Systems. This might have encouraged the company behind the benchmark to test the graphics card with other ‘content creation’ workloads, such as DaVinci software.

In the latest review featuring DaVinci Resolve Studio, a commercial version of a very popular video editing software, Puget Systems have tested multiple graphics cards from both NVIDIA and AMD that were released in the past four months. According to the results, AMD has still a lot of work to do in order to stay competitive in this particular applicaiton.

The AMD Radeon RX 6900 XT is a 999 USD flagship model from the RDNA2 series. This graphics card is pretty much nowhere to be found right now, but Puget Systems who specialize in workstation PC manufacturing managed to find a unit for their test. This model, just like the rest of the current Radeon RX 6000 series stack, should be interesting to content creators for one particular reason, the 16GB memory. This memory is a perfect match for 4K content editing, but probably not enough to process raw 8K data. For those tests, professional series, which usually offer more memory than gaming series, are preferable. NVIDIA RTX 3090 graphics card for this very reason, seems a better fit for 6K or 8K video editing, as it comes with 24GB of high-speed GDDR6X memory. 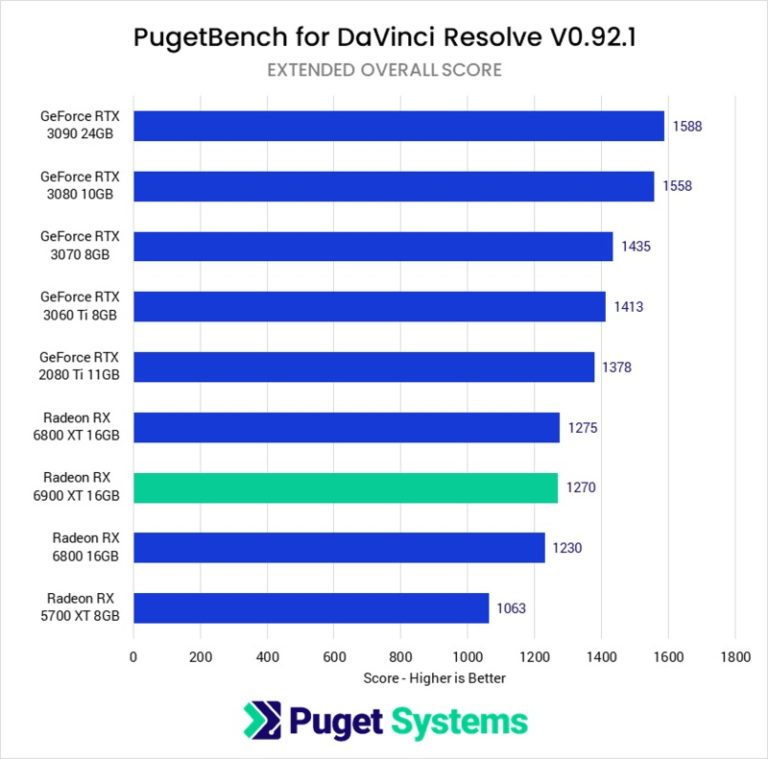 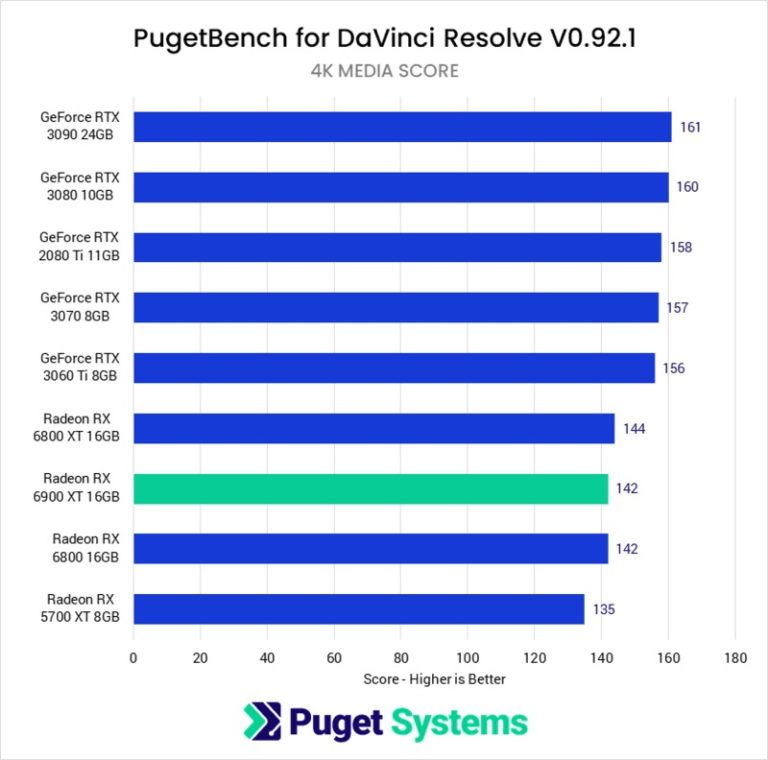 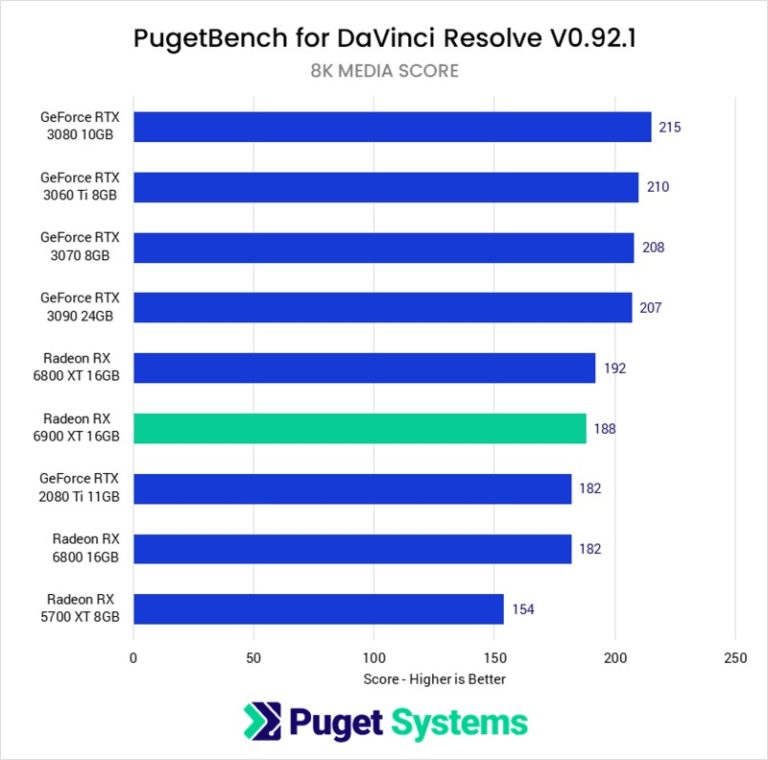 Overall Extended Score is a good indicator of the graphics cards’ performance, however, it is likely that they are more CPU-bound. For that reason it is also necessary to test the graphics card’s performance with GPU filters applied such as Temporal Noise Reduction or OpenFX effects, which are accelerated by GPUs: 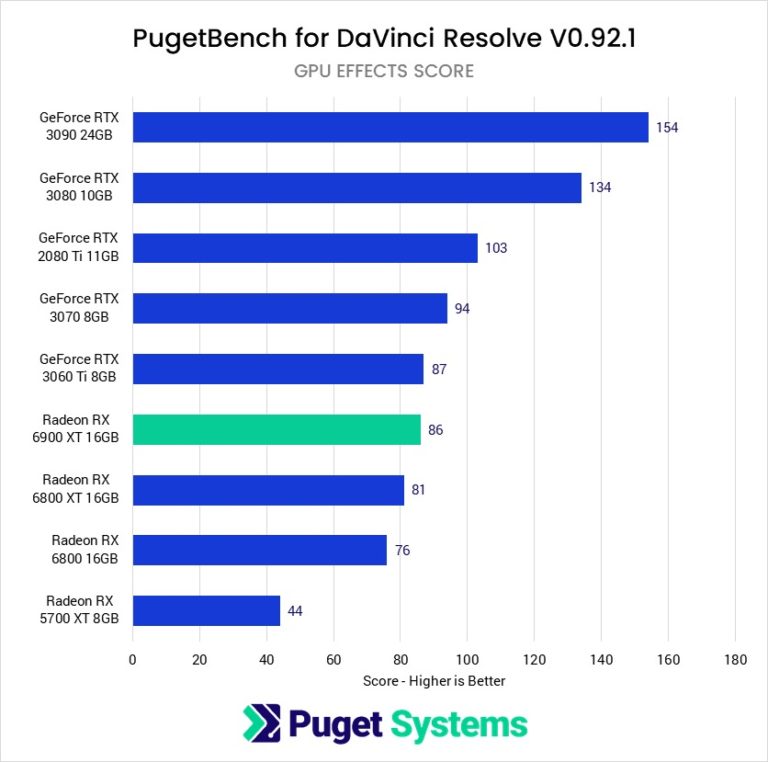 The conclusion from the reviewer:

From an overall standpoint, the Radeon 6900 XT is solidly beaten by the significantly less expensive GeForce RTX 3060 Ti by about 10%, and falls behind the more closely priced (although still cheaper) RTX 3080 by a larger 23%. And when looking at especially GPU bound tasks like noise reduction and OpenFX, the results are even more in NVIDIA’s favor with the GeForce RTX 3080 scoring a massive 56% higher than the Radeon 6900 XT.
— Matt Bach, Puget Systems

The full review has individual benchmarks available. It appears that RX 6900 XT is able to outperform RTX 3060 Ti in just a few tests. Otherwise, AMD Radeon RX 6000 series are no match for GeForce RTX 30 in DaVinci Resolve. The reviewer does not list the driver used, but it is important to note that NVIDIA has special ‘Studio Drivers’ which comes with support for this DaVinci’s accelerated GPU workloads.

AMD has not yet released its Radeon Pro series based on Navi 2X GPUs. It remains to be seen if those graphics cards will be faster in content creation workloads such as DaVinci Resolve.