AMD was very reluctant to share ray tracing performance numbers of Radeon RX 6800 XT before launch, so we decided to help.

AMD does see the potential of ray tracing in games. In the new set of slides that we have already seen, the company explains the complexity of rasterization and ray tracing. AMD sees ray tracing as the ultimate solution to recreating reality in graphics, which is typically reserved for offline rendering.

With the launch Radeon RX 6800 series AMD noticed that developers want to ‘judiciously deploy ray tracing to improve realism in their games’. Real-time raytracing will improve image quality but comes at a performance tradeoff. AMD understands that developers are still learning what is the best way to use those ray-traced effects in combination with rasterization. With Radeon RX 6800 series, AMD offers full Microsoft 12 Ultimate support and an extended library of its FidelityFX developer’s tools package to improve the gaming experience.

In the slides that will officially be published by AMD tomorrow, the company confirmed RX 6800 XT 2560×1440 performance in five games (that support DXR). In Battlefield V, the RX 6800XT is expected to offer 70 frames per second on average. Call of Duty MW should offer around 95 FPS, both games were set to Ultra DXR quality. In Crysis Remastered an average of 90 FPS is to be expected. The lowest average framerate might be seen in Metro Exodus where 67 FPS were measured by AMD. Finally, in Shadow of the Tomb Raider, AMD claims RX 6800 XT will offer 82 FPS on average at 1440p resolution. 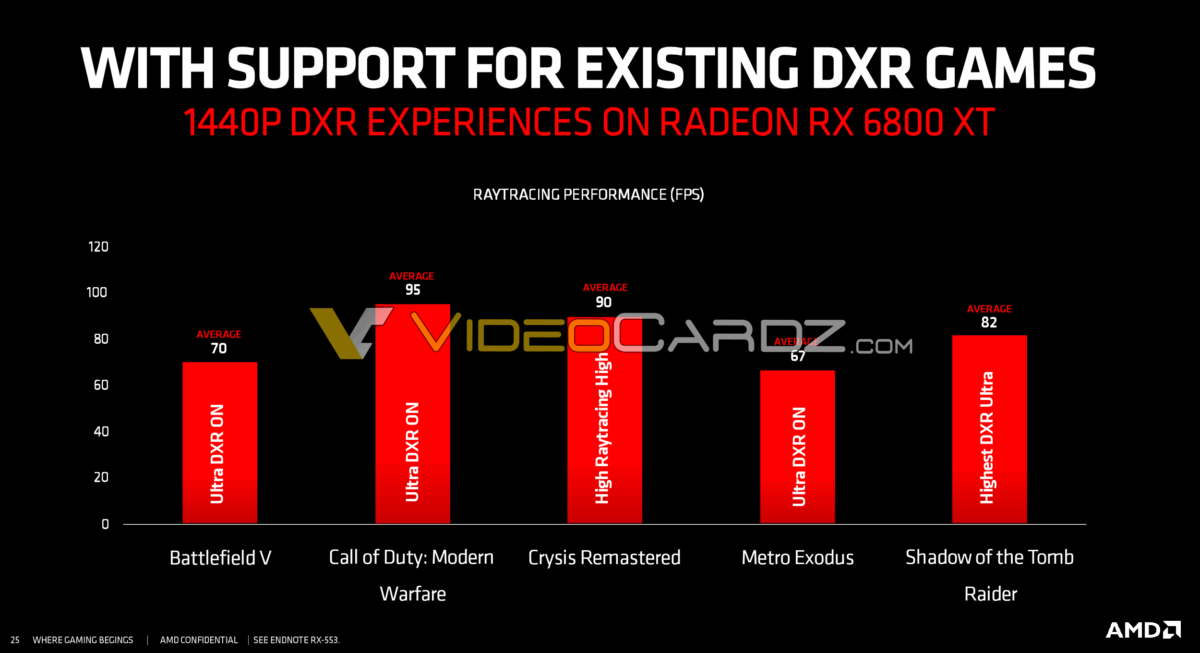 AMD does not stop at gaming and compares Radeon RX 6800 XT to Radeon VII in hardware acceleration for content creation. For software such as Blender, Houdini and Autodesk Maya AMD will offer plug-ins for hardware accelerated ray tracing. Support for Blender Cycles is also planned.

With Radeon ProRender 2.5.17 for Blender 2.90 and claims that RX 6800 XT will render up to 49% faster in ‘The Junk Shop’ splash screen, up to 60% faster ‘Barcelona Pavilion’, 62% faster ‘Car Demo’ and up to 68% the ‘Classroom’ demo. All these are demo splash screens that can be downloaded from the Blender website.

AMD also confirms that FidelityFX Super Resolution is in development (that’s the official name of the technology). This is a clone of NVIDIA DLSS (Deep Learning Super Sampling) technology. NVIDIA’s solution relies on Tensor cores to render at a lower resolution and artificially upscale the image using deep learning algorithms.

[FidelityFX Super Resolution] Currently in development at AMD.  Stay tuned for more information as we collabrate with game developers.