AMD Radeon RX 6700 XT to be available in two variants

A new piece of information was revealed today in a video from Coreteks, AMD is allegedly set to launch two variants of the RX 6700 XT graphics card with different TGPs.

This is not actually the first time we are hearing about two 6700 XT variants. Back in January, we told you AMD is now offering two variants of the new SKU to its partners. One of the variants would be strictly for overclocked models, while the latter would be kept for stock or reference-based cards.

Coreteks’ information goes a bit further. He claims that those variants are called ASIC A and ASIC B. The A variant would offer a TGP of 230W and the B variant would have it reduced to 189W. The A variant would be used for all factory-overclocked models. The B variants, on the other hand, would be available with the reference design and non-overclocked variants. According to Coreteks, the RX 6700 XT will be on average 20 to 25% faster than Radeon RX 5700 XT, which the new SKU is replacing. What exactly does this mean to consumers is unknown, but AIBs are allegedly expected to pay more for the A variant. 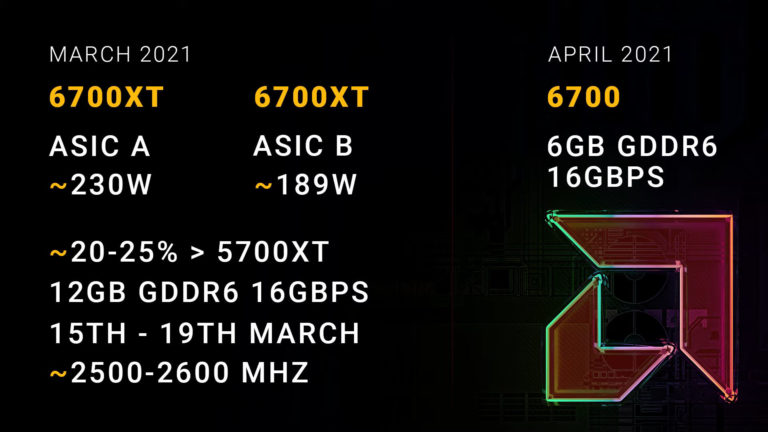 It is worth noting that ASIC A&B segmentation should not be comparable to Navi XT and XTX variants that were previously available under some GPUs in the past. Those were pre-binned chips that gave AIBs a chance to overclock select cards a bit higher. The Navi22 segmentation is more or less an artificial power limitation.

It is also mentioned that the clock speeds are not finalized, but the memory speed is now expected to be 16 Gbps, the same speed as Navi 21 models. This means RX 6700 XT cards will have a bandwidth of 384 GB/s, a 64 GB/s slower than the RX 5700 series. However, do note that this does not account for Infinity Cache speed.