Some good news is coming from cryptocurrency mining blogs, which received the first details on RX 6700 XT mining performance.

Cryptomining Blog reports that AMD Radeon RX 6700 XT will offer around 43 MH/s hash rate in Ethereum mining, significantly less than RX 5700 XT. According to the public statistics from Minerstat the predecessor based on Navi 10 (Radeon RX 5700 XT) offers around 54.3 MH/s in Ethereum mining. What this means is that RX 5700 XT is around 25% faster in mining than RX 6700 XT. Just three 3 days ago TweakTown reported on 40 MH/s mining power on RX 6700 XT. Their initial data wasn’t far off from the real-world number.

The RX 6800/6900 XT series can offer around 60 MH/s while GeForce RTX 3060 Ti can offer around 50 MH/s. Those are of course stock settings, while most cards see a big improvement after being power limited and overclocked on the memory. The RX 6700 XT optimizations could bring the card closer to 48 MH/s, Cryptomining Blog estimates. However, for now, the card does not look like the best choice for mining. 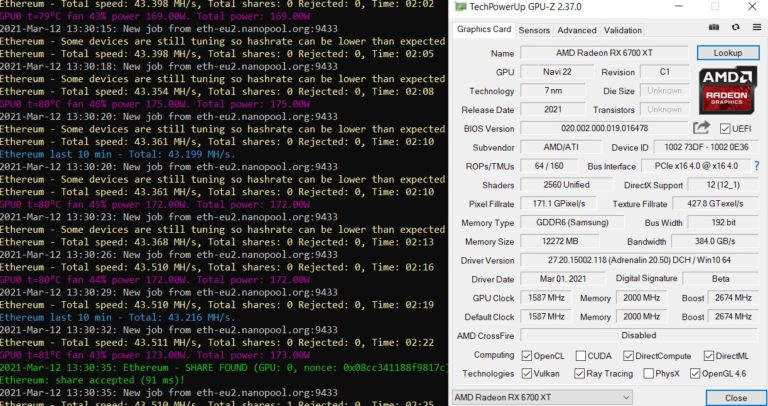 The Blog also claims that RX 6700 XT can offer similar performance to RTX 3060 in Ravencoin mining. This is only because NVIDIA did not block this particular mining algorithm on their card, but Ehtereum mining is a completely different story. It is said that if not for the mining limiter on RX 3060, both cards would offer similar mining performance across all alt-coins. 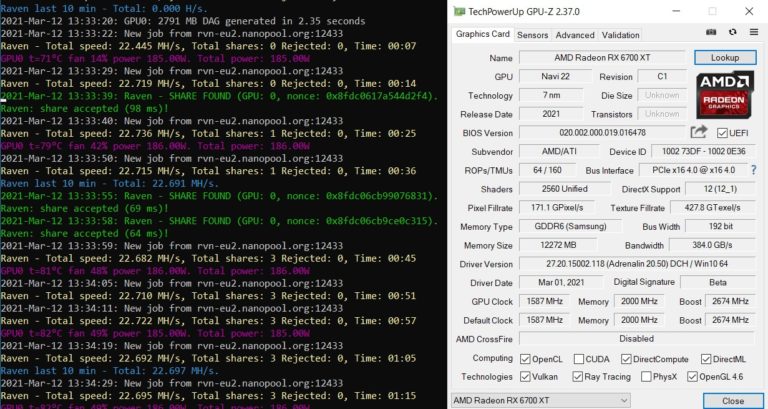