It looks like Wccftech got their hands on RX 6700 XT performance number, including ray tracing.

New performance figures have been shared by Wccftech day. The site has provided information on RX 6700 XT framerates in 1440p gaming as well as 1080p gaming with raytracing enabled. The source of the data is unknown, but our readers should know that Wccftech is under NDA, because they already have multiple Radeon RX 6700 XT graphics cards at their disposal.

AMD has marketed their new Navi22 based model at 1440p gaming workhorse. The manufacturer has not provided any 4K or 1080p performance figures. The same can be said about ray tracing performance. AMD is not eager to share how powerful Ray Accelerators are in this card, because all previously released RDNA2 models have shown worse ray tracing performance compared to NVIDIA’s Ampere.

AMD is likely to treat raytracing seriously only when its deep learning super-resolution technology (FidelityFX SuperResolution) will be released. According to the performance figures leaked by Wccftech, the current raytracing performance is not really that bad, but certainly not good enough to be put on marketing slides.

The Radeon RX 6700 XT has been price at 479 USD. This is just 20 USD less than GeForce RTX 3070 and 80 USD more than RTX 3060 Ti. The graphics card has therefore been put in between NVIDIA’s most popular graphics cards of the current generation. The site has information on 1440p gaming performance (what AMD is targeting with Navi 22 XT) and 1080 with ray tracing. 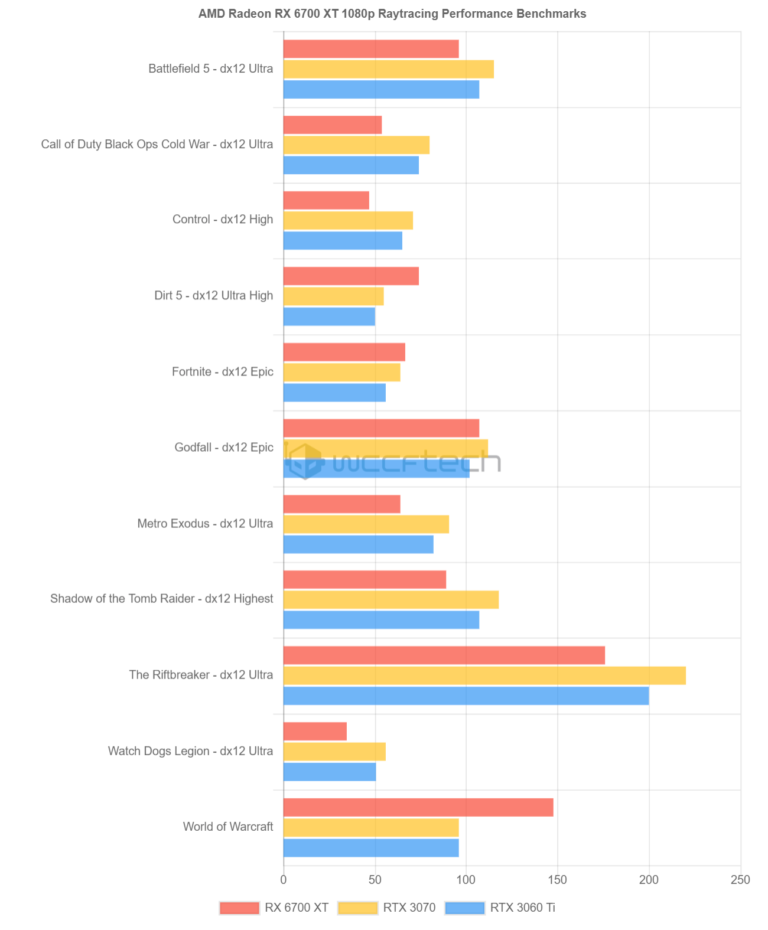 The Wccftech charts are not in the best readable format (values only appear when you hover with a mouse), we made our own chart using the same data:

The Radeon RX 6700 XT is trading places with GeForce RTX 3070, which offers almost identical performance in this rather long list of games.

With raytracing enabled, AMD Radeon RX 6700 is no longer the fastest graphics card in the comparison. The Navi22 based model with 40 Ray Accelerators is even slower than GeForce RTX 3060 Ti, which is 10% faster on average. The RTX 3070 has a 20% higher performance compared to AMD 6700XT.