It looks like Radeon RX 6600 series launch is imminent.

AMD promised to launch its mobile RDNA2 series in the first half of this year. AMD has delivered on this promise and many Radeon enthusiasts are already using ASUS ROG Strix G15 laptops featuring RX 6800M graphics. That promise was made at CES 2021 many months ago, but we are still waiting for the full fulfillment, which is “new desktop GPUs”. In the meantime, AMD only launched its Radeon RX 6700 XT and RX 6900 XT LC (which was more of a paper launch).

At CES 2021 AMD also promised to launch a mysterious single-fan graphics card. To this day, that model has not yet been released, but we are starting to learn more about it. Everything points to this card being the first Radeon RX 6600 model.

In one of the most recent drivers release, AMD actually hid information on Radeon RX 6600 XT and Radeon RX 6600 GPUs, both based on PCI Device ID of 73FF. This was discovered by a prominent leaker @KOMACHI_ENSAKA. This ID happens to correspond to Navi 23 GPU, which is already being used by a mobile Radeon RX 6600M. In other words, both desktop GPUs are confirmed to feature Navi 23 GPU. But more importantly, this leak would suggest that both GPUs would probably launch at a similar time, which is also good news. 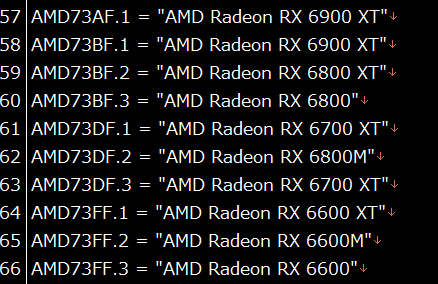 Not much is known about the desktop Radeon RX 6600 series at this point though, but we have seen some leaks from the Eurasian Economic Commission regulatory office. It would appear that at least two AMD board partners believe that RX 6600 XT will feature 8GB GDDR6 memory. The configuration of the non-XT variant is not yet known, but it would probably be either 4GB or 8GB, considering Navi 23 GPU configuration.

AMD Navi 23 GPU is the latest addition to the RDNA2 GPU family. This processor features up to 2048 Stream Processors and offers a 128-bit memory bus. This GPU is also used by Tesla’s new infotainment system for updated Model S. In fact, Tesla’s CEO Elon Musk himself was bragging about this infotainment system delivering PlayStation 5-like performance. This is technically correct because Navi 23 GPU is said to deliver around 10 TFLOPs of single-precision compute power while only requiring around 100 Watts. We know this because AMD already launched its Radeon Pro W6600 graphics card based on Navi 23 for workstations.