Initially, we have only seen reviews of the Radeon RX 6800M GPU which is now offered with ASUS ROG Strix G15 gaming laptop. The RX 6700M and RX 6600M are not available yet (technically RX 6800M is not available outside the US either). Clearly, there is a lag between the launch and global product availability, but it will probably take a few weeks before we start seeing new products based on updated RDNA2 mobile graphics cards in stores.

While RX 6700M will launch later, the RX 6600M has already been confirmed to launch with HP Omen 16 gaming laptops. The reviewer 金猪升级包 from Zhihu does not confirm if this particular laptop was tested, but it shouldn’t really matter as all graphics cards included in the comparison were equipped with the same Ryzen 7 5800H processor. 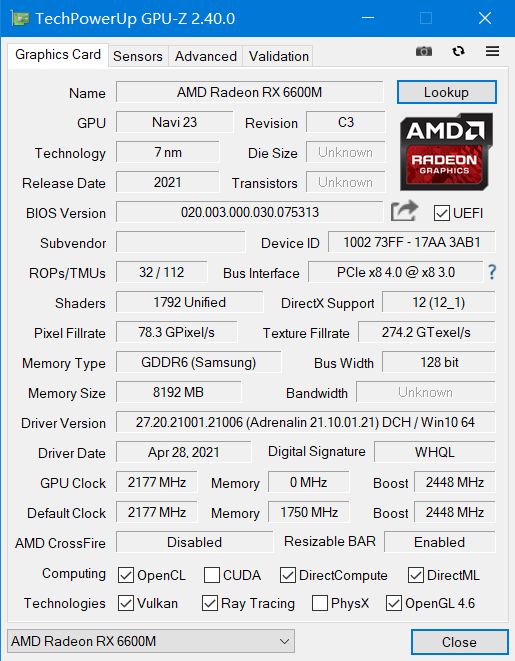 AMD Radeon RX 6600M is based on Navi 23 GPU (codenamed R21-E65-90) equipped with 1792 Stream Processors (28 Compute Units). This is not the full configuration of this GPU (which has 32 CUs), but it is interesting to see how competitive a cut-down variant can already be versus NVIDIA GA106-based RTX 3060 series. This model has 8GB GDDR6 memory across the 128-bit interface, which is then supported by Navi 23 Infinity Cache of 32MB. The GPU will be available with a TGP ranging from 60 to 100W, the sample tested has 100W set by default.

The Total Graphics Power leads us to the first performance test, comparing RTX 3050 Ti, RTX 3060, and RX 6600M at different power planes. It shows that there is a 39% performance difference between 100W and 60W TGP settings for Navi 23 GPU model. The chart for this SKU is more linear, which indicates better power efficiency than the NVIDIA Ampere series. 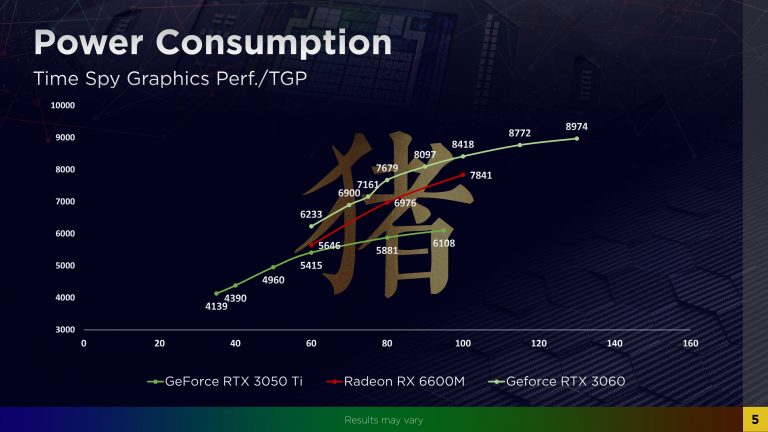 The reviewer is comparing GeForce RTX 3050 Ti with a maximum TGP of 80W (+15W Dynamic Boost), RTX 3060 with 115W (+15W with Dynamic Boost), and Radeon RX 6600M at 100W TGP default with 20W headroom with Smart Shift, which this graphics card supports. In other words, all GPUs are running at their full potential.

In 3DMark RX 6600M outperforms RTX 3060 Laptop GPU in Fire Strike tests which heavily favors powerful rasterization. On the other hand, the RTX 3060 Laptop GPU is better in Time Spy and Port Royal tests. On average though, both cards offer almost identical performance. 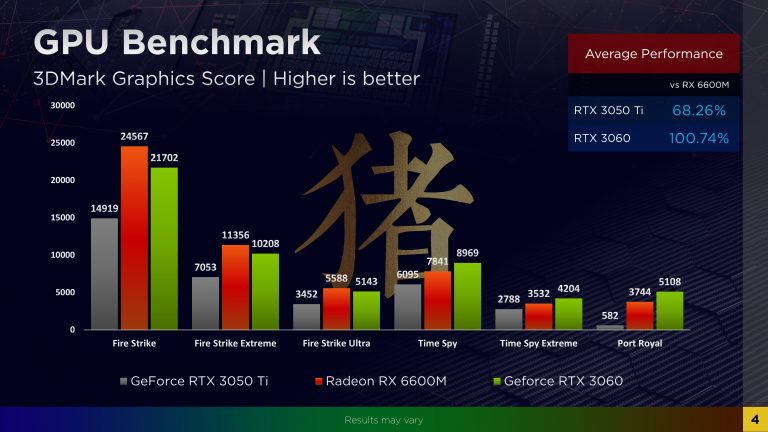 The RTX 3060 Laptop GPU leads in 1080p AAA gaming though, while again, offering identical performance to RX 6600M in e-sports titles.  The performance gap increases in RTX 3060 favor once the resolution is increased to 2560x1440p. In such a scenario, NVIDIA GA106 GPU is on average 13% faster. 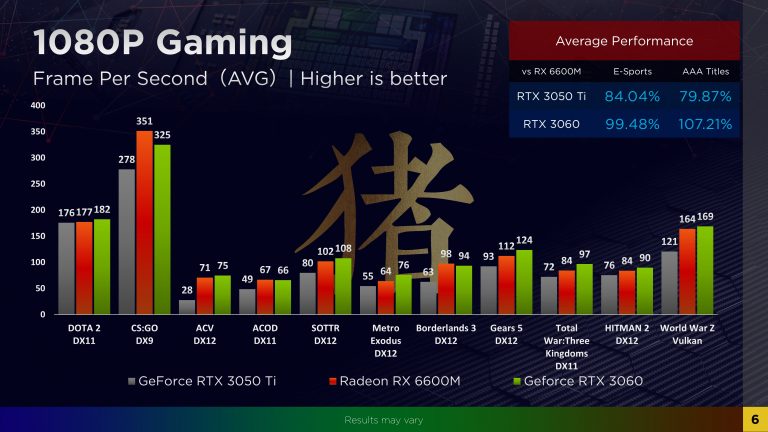 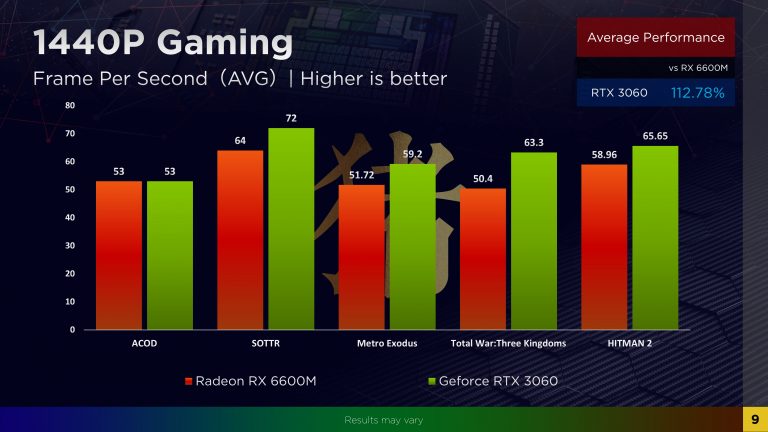 At this point, no one should be shocked to learn that Ampere GPUs are better in raytracing titles, especially if they were developed with NVIDIA’s help. In SOTR and Metro Exodus, RTX 3060 is on average 37% faster. The reviewer does not provide the exact game settings that were used. 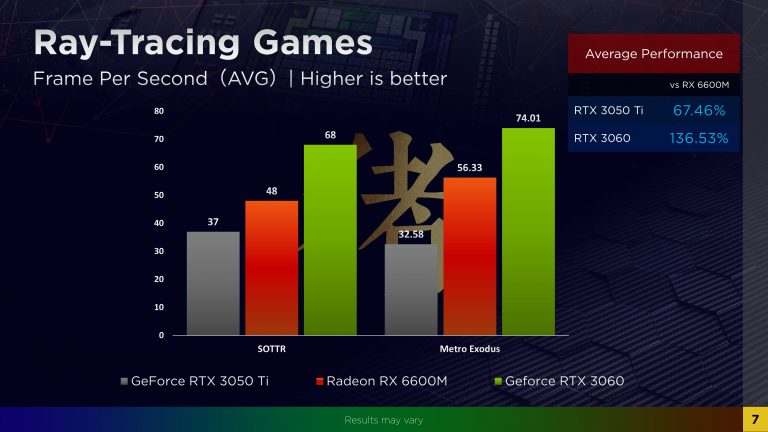 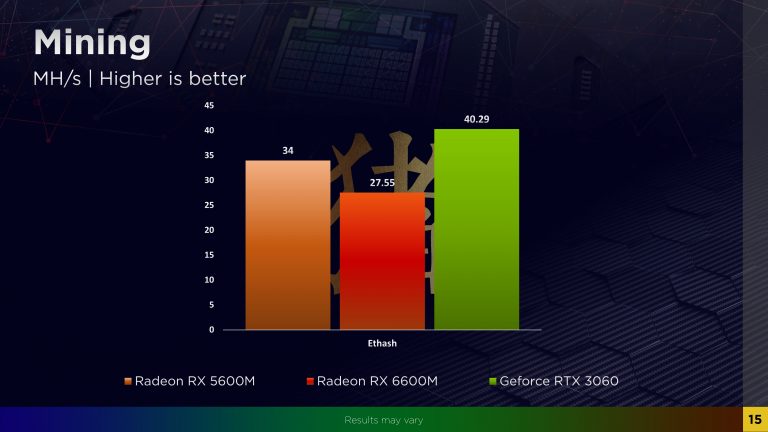 We encourage you to check the full review by following the link below.