A while ago, we have reported on NVIDIA RTX 30 Laptop GPUs being rebranded as full fledge desktop cards and sold on Chinese sites. It appears that those companies have recently started selling mobile Radeon RX 6000 series as well.

One might wonder why would anyone buy a laptop GPU to act as a desktop card, but there is actually a very good reason. These cards are much cheaper than desktop models. What is likely happening here is that some companies are buying laptop GPUs in large quantities, which are cheaper than desktop, then installing them on desktop boards.

And speaking of specs, the RX 6600M is basically the same model as the desktop GPU. Both feature Navi 23 GPU and have very similar boost clocks in 2.4-2.5 GHz range. There is not even a big difference in power, as mobile GPU is up to 100W (TGP) and desktop card is 132W (TBP). Of course, both come with 8GB GDDR6 memory across a 128-bit bus and have the same 14 Gbps speed.

According to the review from Miyconst, this laptop GPU can still be overclocked, which can lead to stable 2.5 GHz clocks. However, memory overclocking does not appear to work, as the card immediately enters safe mode. The GPU-Z software confirms this is a mobile GPU, and it is fully compatible with AMD drivers:

It appears that those companies are simply reusing boards that would otherwise be used for desktop RX 6600 models. The laptop RX 6600M has the same GPU, nearly same configuration and even the memory.  In most cases, this procedure would be as simple as installing a new GPU and flashing laptop BIOS. 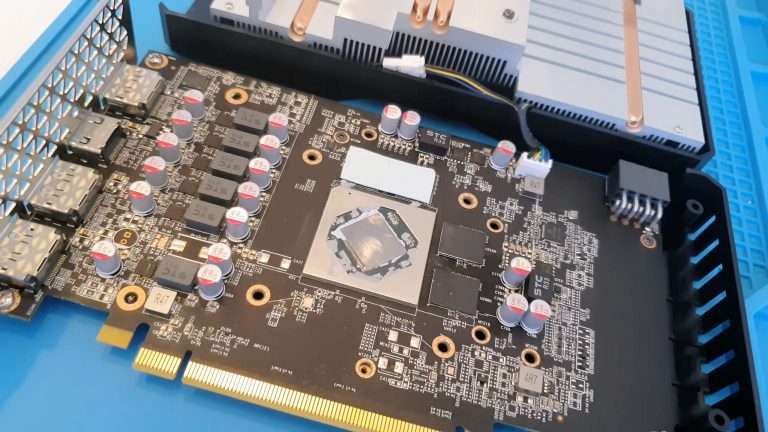 Although the cards sold on Chinese sites have full PCIe 4.0 x16 slots, those are of course not wired to 16 lanes. Both the desktop and mobile GPUs are limited to 8 lanes.

It goes without saying, but such models are not officially supported by AMD, however since the drivers only check for GPU PCI Device ID, they will be detected as mobile and the drivers should work regardless. These cards are also much cheaper than desktop models, but they come with limited warranty and are likely a subject to additional import fees.