New information on the upcoming Navi 23 graphics card from AMD.

According to YouTuber Coreteks AMD is set to launch its Radeon RX 6600 XT graphics card in August. Furthermore, during the last Broken Silicon podcast from Moore’s Law is Dead one of the commenters suggested that the price of this model could reach as high as 399 USD. This commenter was Kepler, a leaker who has already shared confidential information before. Interestingly, the same price appears in Coreteks’ video.

While neither of the sources is sure that this is the final price, it seems quite interesting that both have shared the exact same rumor in a span of a few hours. It clearly shows that AMD’s internal pricing information is leaking. Judging from how accurate previous reporting by those YouTubers was, the information shouldn’t just be ignored, although the 399 USD price tag is a lot more than was expected. In fact, this is just 80 USD less than RX 6700XT’s MSRP. 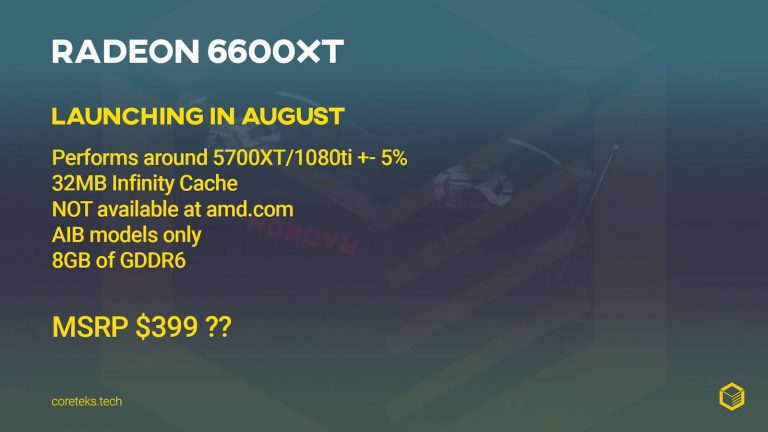 Coreteks also revealed that RX 6600 XT will launch in August and that there is no word on the non-XT model availability. Both SKUs were recently listed by PowerColor on the official website, which suggested that they might launch simultaneously. With all this new information in mind, that might not be the case though.

Furthermore, it is revealed that RX 6600 XT might not launch in reference form and the design that has leaked is strictly for promotional purposes. This means that RX 6600 XT will only launch with customizations from board partners and that AMD will not be selling this card through its official webstore.