We have confirmed information on AMD’s next graphics card from the RDNA2 series.

AMD Radeon RX 6600 non-XT is the upcoming mid-range SKU that will target 1080p gaming. The graphics card had already appeared in the leaks earlier this month when we shared the first exclusive renders of the Gigabyte EAGLE model. The card had also appeared at the retailer’s website with an eye-watering price tag.

We received partial embargo information on this new card that is supposedly launching in mid-October. The embargoes listed below are clearly not meant for reviewers or retailers, but for board partners who will soon engage in a sample seeding program. AMD will require all AIBs to submit their list of samples by September 15th, which was last week. The shipping of the samples may commence on September 29th, but the samples cannot arrive before October 4th.

Probably the most interesting date for our readers is October 13th, when the reviews should go live. Usually, this date is followed by a product launch, however, this date is not listed in the following table:

We can now confirm that Radeon RX 6600 has 1792 Stream Processors and 8GB GDDR6 memory. The card is the sixth model to launch for the retail market (the RX 6900 XT Liquid is obviously not one of them). According to the specification table, the RX 6600 is to feature 28 Compute Units, which means 4 are disabled on Navi 23 GPU. More importantly, both RX 6600 series cards will feature 8GB GDDR6 memory, the 4GB or 6GB options are not listed. 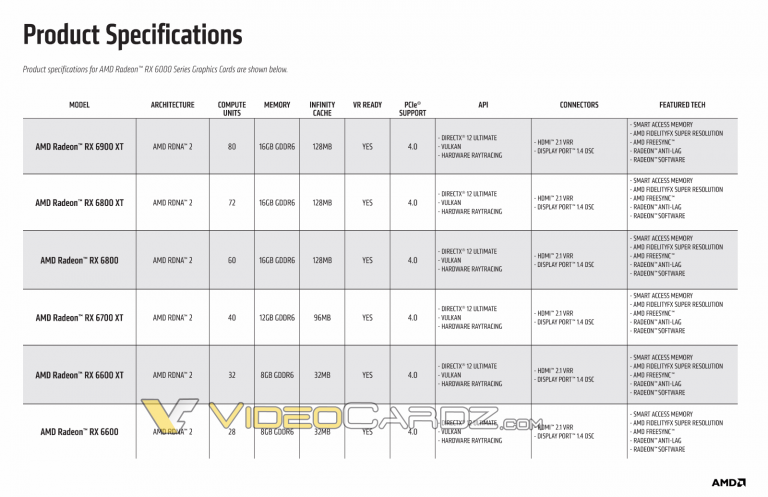 One should not expect AMD RX 6600 reference cards. Same as RX 6600 XT this launch will rely exclusively on AMD board partners’ designs.