A TechPowerUP GPU-Z screenshot confirms RX 6600 non-XT is the first card from the RDNA2 series to ship with reduced memory speed.

Earlier this week we revealed the full specs of the Radeon RX 6600 non-XT model, the upcoming mid-tier graphics card based on Navi 2X architecture. This card will be the slowest desktop RDNA2 card that AMD has launched yet, featuring ‘only’ 1792 Stream Processors, a reduction of 256 cores from the full Navi 23 GPU.

AMD Radeon RX 6600 will have lower frequencies compared to the XT variant. The card will ship with a game clock of 2044 MHz and a boost clock of 2491 MHz, a reduction of 319 and 98 MHz respectively from XT SKU. The graphics core frequency is not the only being limited on the non-XT variant. The card will also have limited memory bandwidth from 256 GB/s to 224 GB/s, which is a result of reduced memory speed from effective 16 Gbps to 14 Gbps. 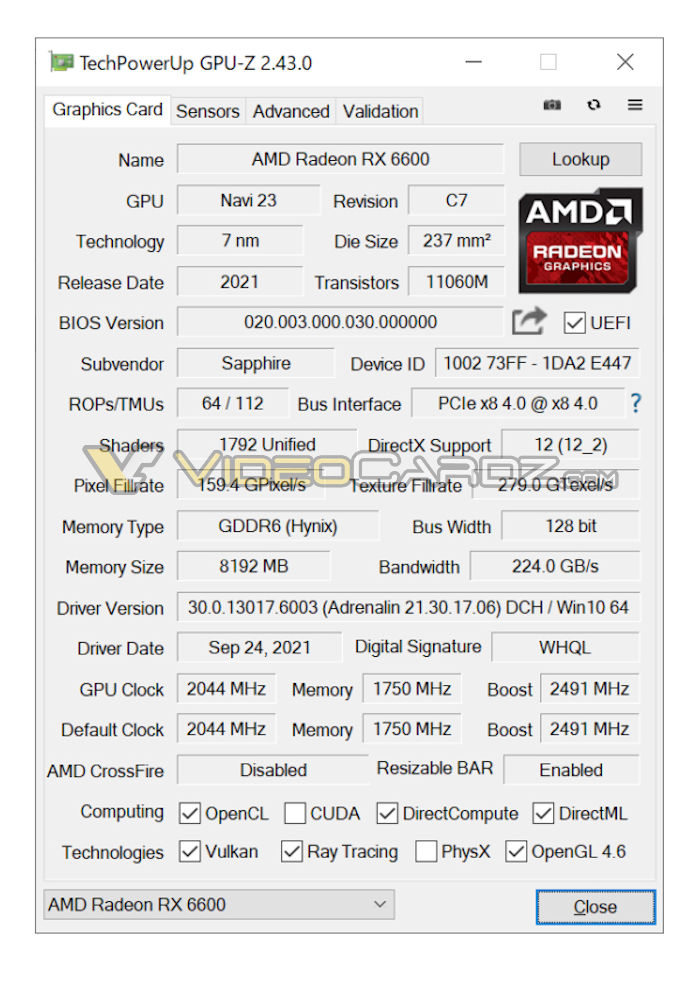 In official benchmarks, the card trades places with GeForce RTX 3060 depending on a title. AMD had to artificially limit the card’s perforamnce by introducing lower clocks, limited bandwidth, and probably more importantly, reduced power consumption of 132W. All those factors will prevent the card from reaching RX 6600 XT performance and self-competition in the RDNA2 stack.

AMD claims that their RX 6600 non-XT on average offers 1.3x more performance per watt than GeForce RTX 3060, which appears the main selling of this new SKU. The card officially launches on October 13th, which is also the date of the review embargo.