The actual retail price is not great, but not the worst either.

Cowcotland is reporting on the actual retail price of the Radeon RX 6500 XT graphics card. According to the site, the card is to cost 299 EUR in stores, which is more or less 100 EUR than the official price. We reached out to Cowcotland for a comment and they confirm that this is the first listing price of the upcoming custom model with all applying sales taxes.

AMD did not communicate the pricing for Europe yet, which is typically the case when the card is not released. However, we have a chance to compare the official US MSRP (suggest retail price) for the cards that were already released (and have their EUR MSRP) with the actual retail listing. In this case, the RX 6500XT is shaping to be just as overcharged as existing designs.

As a side note, it is kind of interesting that many retailers actually list RX 6600 and RX 6600 XT at the same price.

According to AMD, the main competitor for RX 6500 XT is a bit old but still popular GeForce GTX 1650. This card is still easily available for as low as €280-310. With AMD’s performance claims in mind, it does not sound like a bad choice over GTX. 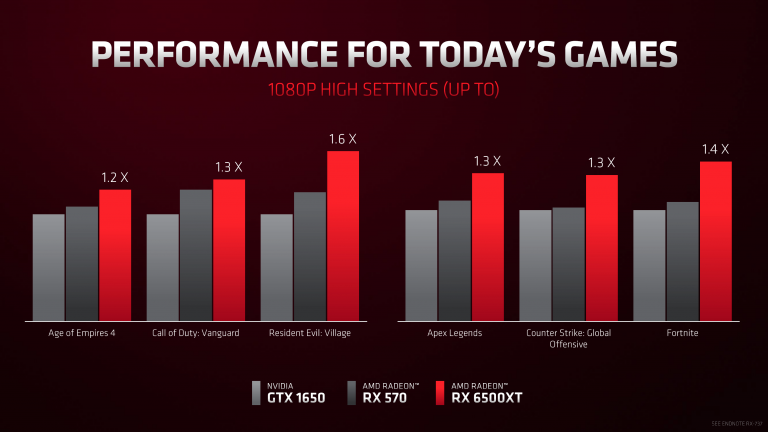 Yesterday we made a story that RX 6500 XT is limited to PCI Express 4.0 x4 interface, which could impact performance in some cases. However, that is for a debate once the card is released. NVIDIA is yet to respond with GeForce RTX 3050 launching in late January. This model will not have such limitations and it will feature twice as much memory (8GB), but will also cost more: 249 USD according to NVIDIA’s alternative reality.

AMD Radeon RX 6500 XT will be released on January 19th. Board partners have already shown their custom designs which will be the only available version of RX 6500XT. AMD confirmed they are not planning to release its reference design, which was already the case with RX 6600 series.