In a series of tweets, KOMACHI reports that there are listing featuring Radeon RX 6500XT and RX 6400 SKUs with 4GB of GDDR6 memory. He does not clarify where those listings can be found (such as a webstore or manufacturer’s website). However, such a claim would mean that AMD has its first RDNA2 GPUs with a memory capacity lower than 8GB (RX 6600XT).

Both SKUs are also rumored to feature Navi 24 GPU, the entry-level graphics processor that has been mentioned in numerous leaks over a long period of time. This GPU is to feature up to 16 Compute Units with a total of 1024 Stream Processors, a 50% cores of the Navi 23. It is by no means a proper daily gaming GPU, but it could be a reasonable choice for casual gaming or multimedia. In fact, Navi 24 should be a lot more popular for laptops. The configurations of the RX 6500XT and RX 6400 are currently unknown, but one would assume that the former features a full implementation of the GPU, whereas the latter will be a cut-down version. 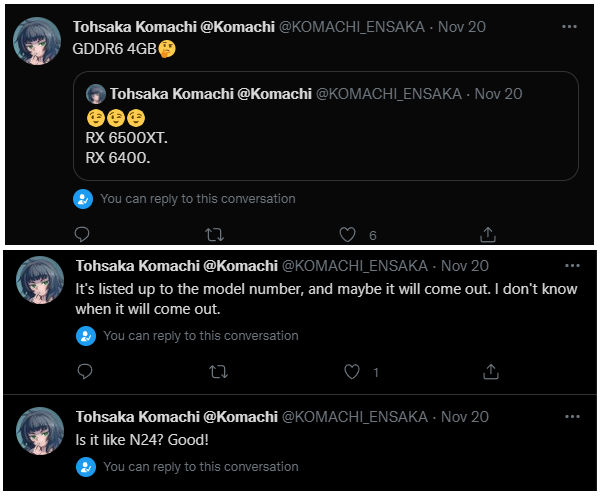 Navi 24 GPU had already appeared in Linux patches with a codename of “Beige Goby”. The processor is rumored to feature a 64-bit memory bus and memory configurations up to 4GB GDDR6, such as the one mentioned by KOMACHI. AMD might want to introduce Navi 24 GPU alongside its new Ryzen 6000 series for laptops in January next year. NVIDIA, on the other hand, despite numerous leaks on GeForce RTX 3050 SKUs, has thus far not released the desktop gaming part based on GA107 GPU.