Alleged specifications of the upcoming Radeon Instinct accelerator have been posted by AdoredTV.

AMD’s upcoming compute accelerator based on ‘new’ CDNA architecture is now expected to launch by the end of this year for EPYC-based systems, AdoredTV claims.

The specifications of the Radeon MI100 are still unknown, but we had first bits of information leaked back in February. A BIOS file revealed that the accelerator features 32GB of HBM2 memory. This has been supported by the latest article at AdoredTV. 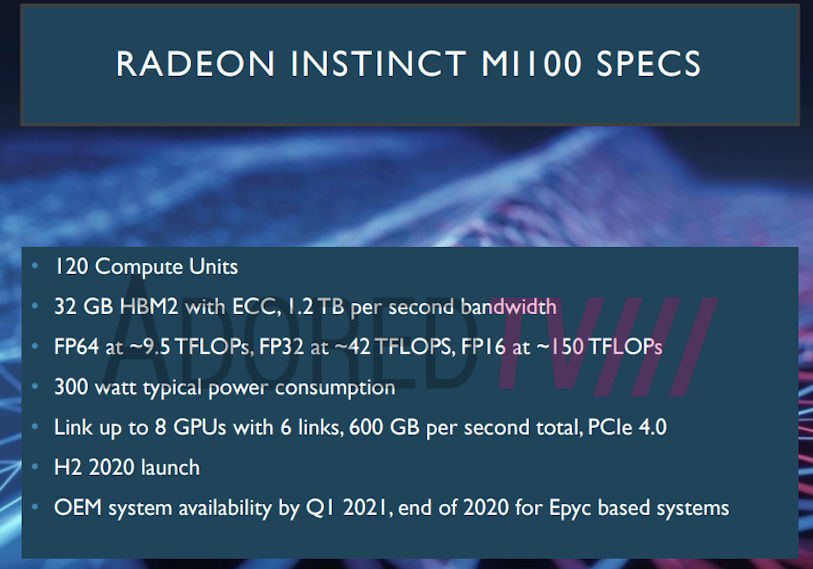 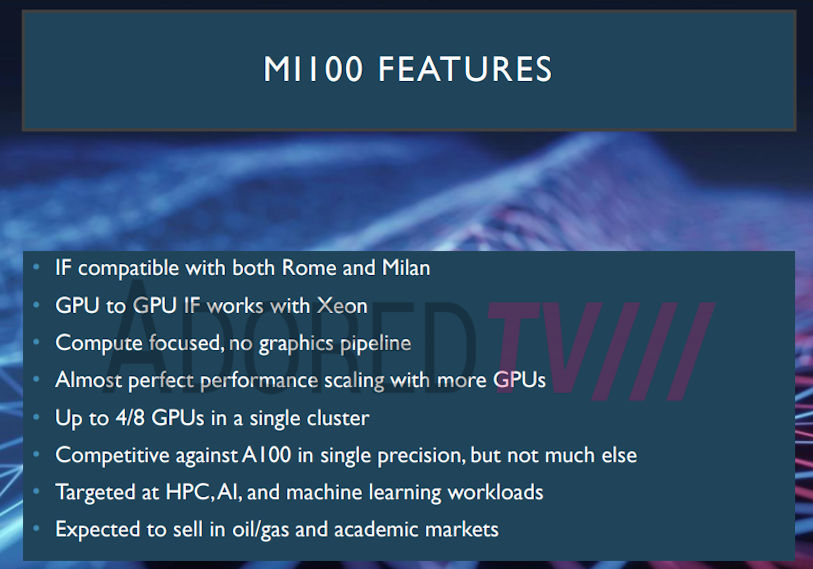 The website further claims that the MI100 will feature 120 Compute Units. Assuming that the CDNA architecture features 64 Processors per Cluster, it would mean that the accelerator has 7680 cores in total (if each Compute Unit had 64 cores). We are intentionally not calling them Stream Processors, because we are unsure if this is the exact name for this architecture.

The following slide does mention that MI100 will indeed offer 2.4x the performance of the A100 in FP32 calculations: 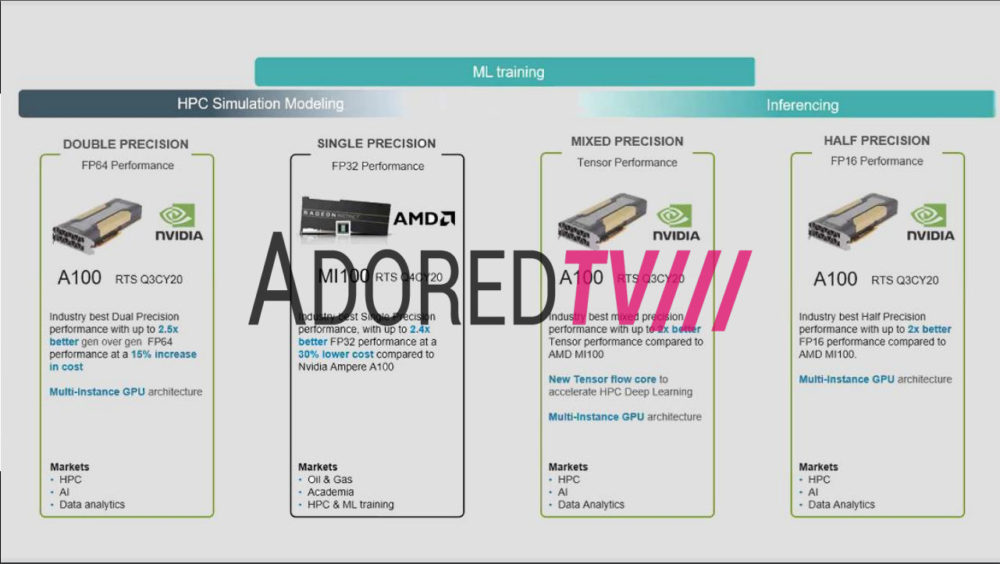 The GPU die size has not been confirmed, but it certainly is much bigger than before. The compute card based on CDNA architecture is rumored to feature the Arcturus processor. Despite the fact, that we refer to the Arcturus as GPU, the processors will not have graphics pipelines. This puts the MI100 even closer to NVIDIA’s A100 accelerator based on ‘Ampere’ architecture in terms of the capabilities. Both are expected to compete in AI, ML, and HPC markets.

Today AdoredTV posted another set of slides, showing MI100 in two server configurations: 3U with 8 GPUs and two EPYC CPUs and 1U with 2 CPUs and 4 GPUs. The latter is also expected to launch with Intel Xeon CPUs, however, the EPYC servers are now expected in December this year (1U) and in March 2021 (3U). 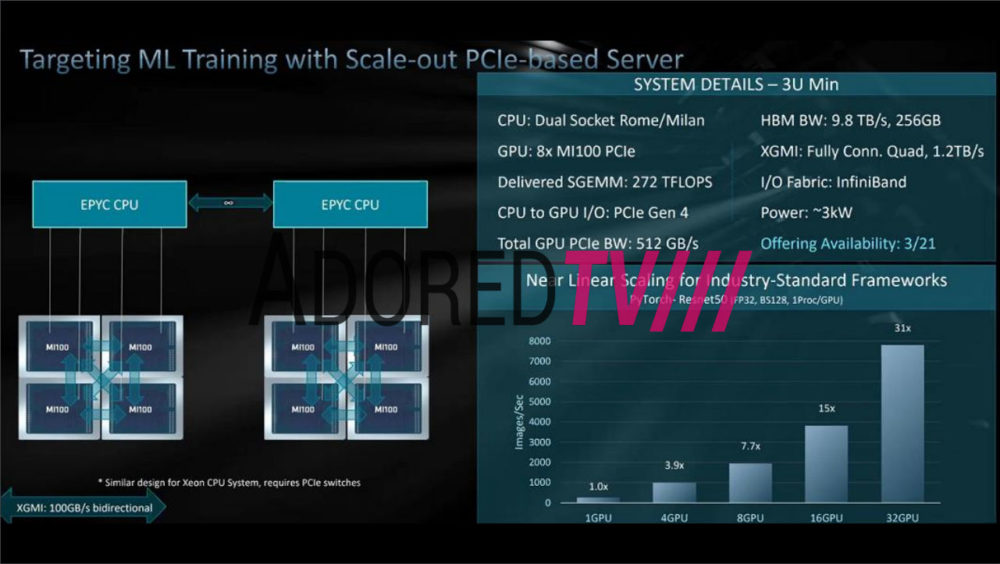 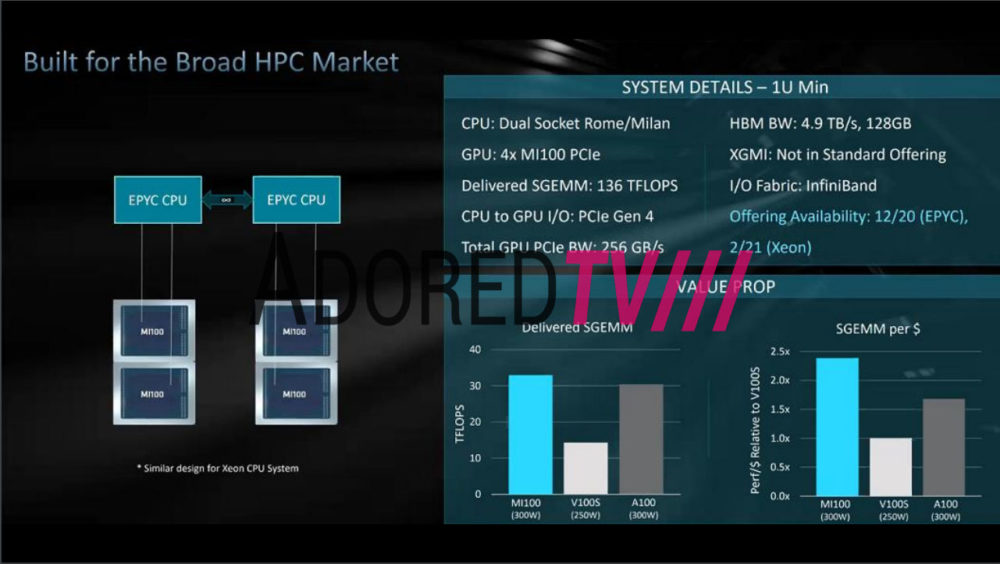