A highly detailed review of AMD Ryzen 6000 APUs has been published on the Zhihu platform by an engineer working Lenovo Notebook Division in China. This review focuses on many aspects, such as APU power efficiency or its battery life. The most interesting part, however, covers the iGPU performance.

AMD Ryzen 6000 series features updated Zen3+ architecture on 6nm node, but the most important upgrade finally came to the graphics subsystem, now offering up to 12 Compute Units based on RDNA2 microarchitecture.

AMD Radeon 660M and 680M are integrated solutions into Ryzen 6000 APUs for laptops, and in the future, for desktop solutions. By offering much newer architecture over Vega, which has been used for nearly all previous Ryzen mobile CPUs, RDNA2 offers not only higher performance, but also support for raytracing.

The review on Zhihu demonstrates the Radeon 600M potential against GeForce MX450, a Pascal (GP107) based discrete model designed for ultra-thin laptops. With the introduction of RDNA2 iGPUs, such solutions are likely to be phased out as integrated graphics take over.

In 3DMark tests, the Radeon 680M is already faster than GeForce MX450 25W, offering better performance in nearly all tests. In fact, the RDNA2 based solution even supports raytracing, a feature not available with AMD Ryzen 4000/5000 Vega GPU or Intel Xe-LP GPUs incorporated into Alder Lake mobile CPUs.

The review also covers the topic of GPU efficiency based on TDP configuration. The Ryzen 6000HS series which were the first “Rembrandt” APUs to be released thus far, are 35W by default. This configuration was not tested, because the review focuses on the 6000H series which are 45W by default. The reviewer shows that 25W Radeon 680M iGPU can gain a further 38% simply by increasing the TDP to 42W.  Interestingly, this does not apply to Radeon 660M (a cut-down RDNA2 iGPU) which only gains 9% when going from 25W to 42W.

ComputerBase, who is currently testing a Ryzen 6000 laptop noticed that Radeon 680M is in fact faster than GeForce RTX 3050 Laptop GPU in 3DMark Port Royal. This is a raytracing test that makes use of hardware-accelerated units that both NVIDIA Ampere and AMD RDNA2 architectures have, however, NVIDIA GPU is limited to 4GB of memory, which is simply not enough for this test. AMD Radeon 680M iGPU being attached to system memory is not affected by this limitation.

Why? Nvidia‘s 3050 mobile has 4 GiB VRAM, which is not enough in THIS case. pic.twitter.com/hPNOeMxR8F

A series of tests were also conducted by PurePC.pl who are reportedly using the latest BIOS for the ROG STRIX G15 laptop (Ryzen 7 6800H based). 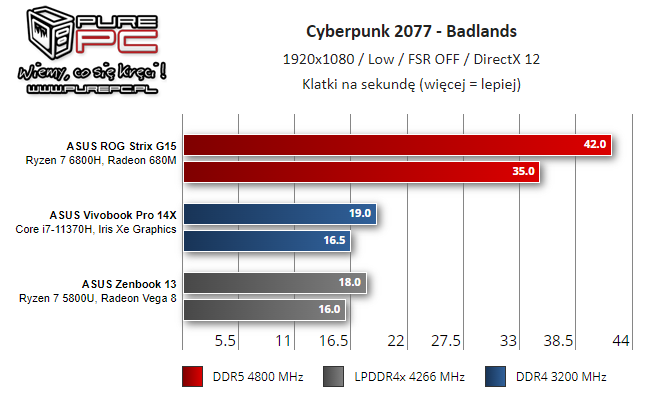 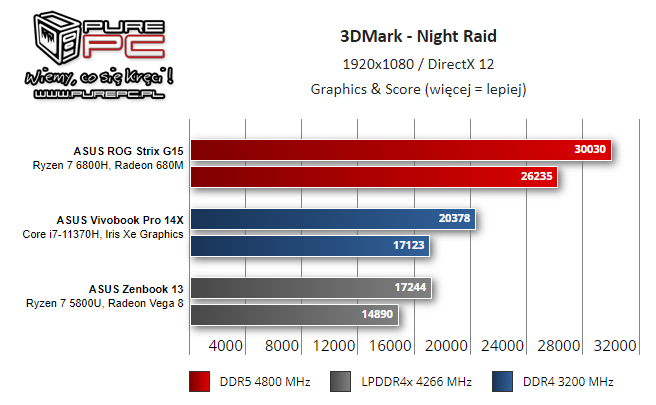 Overall, the Radeon 600M GPU offers better performance than both GeForce MX450 (25W) and Intel Xe-LP (i7-11370H) in 1080p tests conducted by Lenovo. The performance is not at the GTX 1650 Max-Q performance level yet, however, unlike the GTX series, AMD RDNA2 GPU actually does support raytracing (should it ever matter for this performance segment). 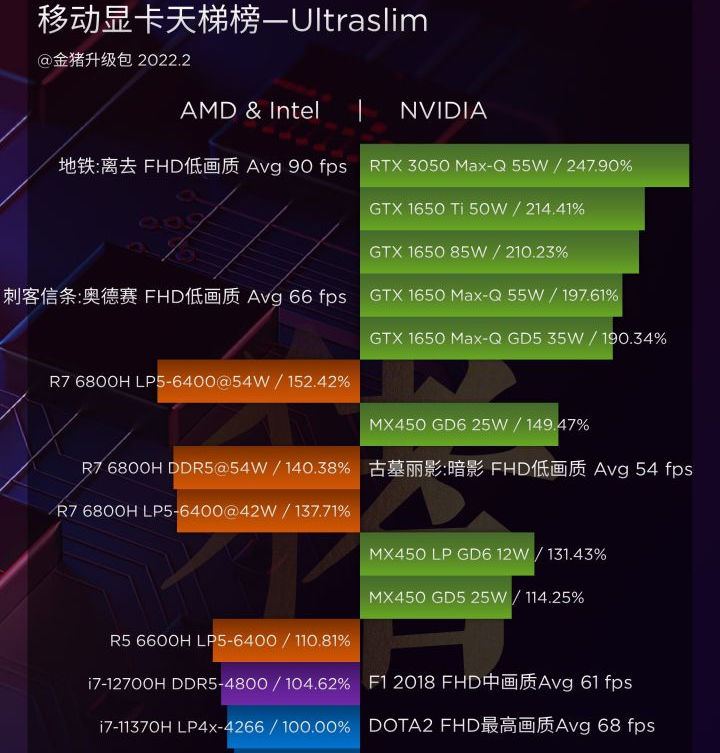 AMD is yet to release its Ryzen 6000H and 6000U series in the coming weeks. It is expected that the company will also launch the desktop APU (6000G) series by the end of this year. With increased GPU clocks, desktop Rembrandt APUs might have a chance to catch up to GTX 16 series.