AMD began releasing patches for GFX11 architecture last week. The GFX11 is a family of GPU known as RDNA3 or NAVI3X.

The GFX11 architecture enablement has begun, and AMD software engineers are now working around the clock to enable all necessary functions for the new architecture to be available at launch. This includes VCN (Video Core Next) IP block, which stores the video codec information.

Interestingly, the VCN4 for RDNA3 GPUs no longer stands for Video Core Next, but for Video Codec Next instead. This might be a typo by the developer, but nonetheless this abbreviation would make more sense. 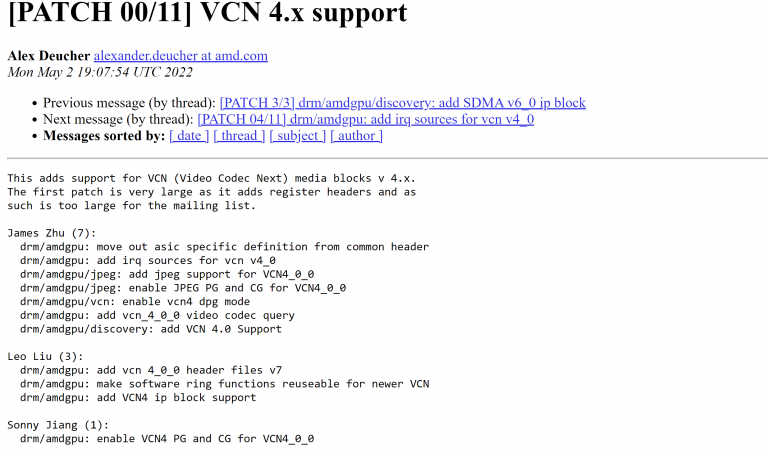 The VCN 4.0 patch includes 12.3k new lines of code, but most of it are register header files, Phoronix notes. Therefore, the VCN4 enablement has only just started and one should probably not draw any conclusions of the code that was posted thus far.

However, it should be noted that the SOC21 (Navi 31) GPU code only lists AVC, HEVC encoding and AVC, HEVC, JPEG, VP9 and AV1 decoding capability. This might simply be the initial list of supported codecs, but as of now, there is no sign of the AV1 encoding, which would be a big loss for RDNA3 GPUs. This open-source standard will undoubtedly gain in popularity once Intel Arc GPUs start actually become available. Intel Xe-HPG architecture is thus far the only one to support AV1 encoding.

AMD RDNA3 GPUs are now set to launch in the fourth quarter of this year. The Radeon 7000 series are to compete with GeForce RTX 40 series expected around the same time. We are probably going to see more changes to the VCN4 code as we get closer to the launch, which may hopefully reveal the support for additional codecs.