AMD Navy Flounder and Sienna Cichlid are both GFX1030

A story with a twist

AMD Navy Flounder and Sienna Cichlid are both GFX1030

This is an interesting twist to our AMD’s ‘meaningless codenames’ coverage. AMD is slowly pushing its Linux patches for the upcoming RDNA2 GPUs, namely Navi 21, Navi 22 and Navi 23. Obviously the focus is currently on the Navi 21, which is expected to be the long-awaited Big Navi.

On Monday we reported that AMD is adding patches for Unified and Graphics Memory Controllers for Sienna Cichlid. The code also included references to HBM memory, although the code did not specifically call these values. Yet, it was added at the same time and only alongside the code for this very new GPU. Naturally, we assumed that HBM memory could be used on Big Navi.

Earlier, we covered a story about Navy Flounder. This is a new codename for yet unreleased RDNA2 GPU, but the code did not explicitly mention any name. Only by following the data it was determined that the GPU *should be* Navi 22. Both Navy Flounder and Sienna Cichlid are using the same ID of GFX1030, as revealed by the latest update to Mesa (open-source OpenGL/Vulkan implementation for Linux). 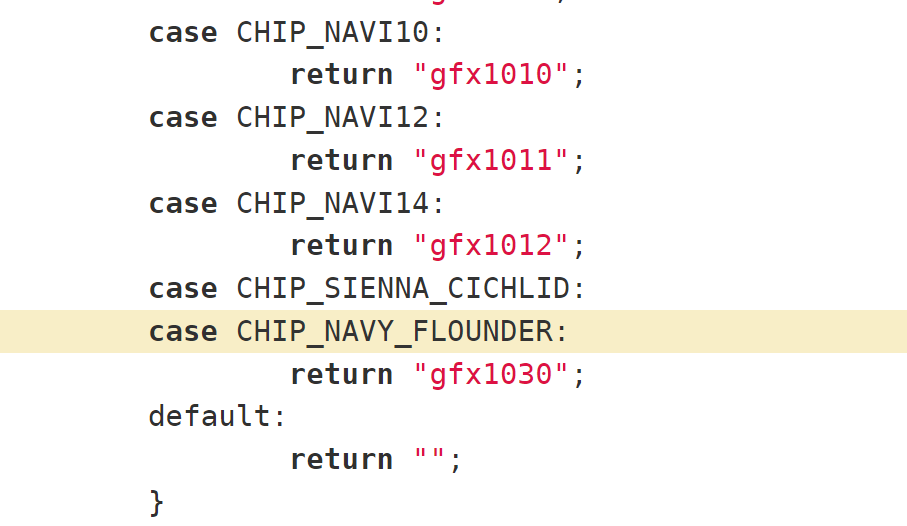 It is not really common for AMD to use the same ID for two different GPUs, in fact, even the Navi 12 had a different ID than Navi 10, despite essentially being a variant with HBM (as shown above).

Historically speaking, only some GPUs from the same generation shared the GFX level. The most recent being: Fiji, Polaris10, and Polaris 11 (GFX803). Both Vega and Navi have IDs for each GPUs. Since we already know IDs for Navi 22 (1032) and Navi 23 (1033), Navy Flounder could either be a variant of Sienna Cichlid or a completely different GPU.