Could those be the specs of AMD Radeon RX 7900XT?

Guys over at 3DCenter have been busy putting together all the Navi 31 rumors that emerged over the weekend. They gathered information from multiple sources, some of which appear to match each other.

Following Yuko Yoshida’s claim that the next-gen flagship GPU called Navi 31 could feature as many as 60 RDNA WorkGroups and Kopite7Kimi’s report on 15360 cores, another person appears to corroborate this rumor. According to Bondrewd, a member of Beyond3D forums, there are 30 RDNA Workgroup Processors (WGP) in Navi 31 GPU. This graphics processor is now rumored to be a dual-die (MCM) design, which would suggest 15360 cores, should each cluster contain 256 shadings units (FP32 cores/Stream Processors), a double of what RDNA2 WGP features. 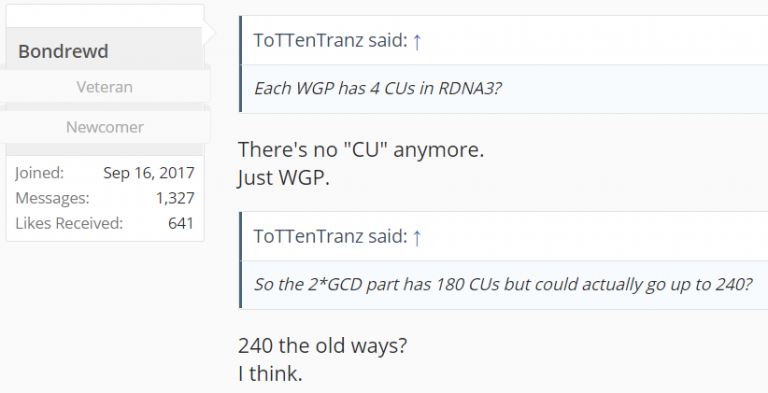 A discussion is also taking place in regard to Navi 31 memory configuration. While no one has yet shared the memory capacity of the next flagship feature, it is commonly believed that Navi 31 is still to offer a 256-bit bus. What is important though is that the Infinity Cache is to expand from RDNA2’s 128MB to 256MB or even 512MB on RDNA3, depending on who is reporting.

If the Navi31's cache reaches 512MB, that does explain why the bitwidth remains at 256bit.