AMD flagship RDNA3 GPU reportedly has a small graphics die, but there is a reason

According to Greymon55, AMD Navi 31 GCD (Graphics Complex Die) is only 350 mm² in size. That’s a relatively small die compared to existing Navi 21 GPU (520 mm²), but the design of next-gen AMD RDNA3 architecture is not as straightforward to simply be compared to current-gen GPUs. 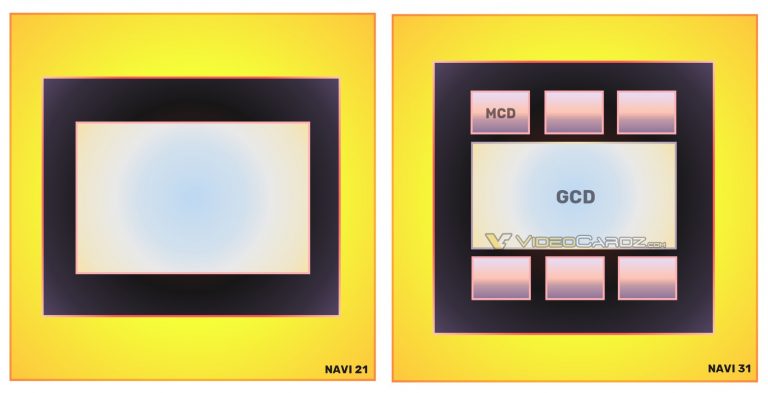 AMD RDNA3 architecture is to feature advanced packaging technology with GCD and MCD (Memory Complex Die) connected to each other. The Navi 31 GPU is said to feature one GCD and up to six MCDs. The innovative GCD+MCD design is to be used by both Navi 31 and Navi 32 GPUs, with Navi 33 going the monolithic way. With an estimated GCD size of 350 mm², and six GCDs at 40 mm² each, the full design could measure 590 mm² which is almost as big as the rumored NVIDIA AD102 GPU (~600 mm²).

As pointed out by 3DCenter.org, the AMD Navi 21 GPU without the Infinity Cache and memory controllers (things that should end up in MCDs), would be 375 mm² in size, so still larger than the rumored Navi 31 figure.

But there is a reason why Navi 31’s GCD is relatively smaller. As noted by @Kepler_L2 who has been analyzing the AMD RDNA3 Linux updates, the new architecture will remove some unnecessary graphics complex from RDNA3 die: XGMI, Global Data Share (GDS), Legacy Geometry Pipeline or Legacy Scan Converter. Those things combined with a smaller process node may explain the size of Navi 31 GCD.

One should also mention that Greymon55 has already teased a possibility of AMD releasing an even more advanced GPU. This mysterious chip is reportedly designed for 16384 core count, which should be expected later. Very little is known about this GPU otherwise, and it is not entirely clear if it will make its way to the consumer space in the first place. However, given NVIDIA’s aggressive and power-hungry plans for Ada GPUs, this new chip may be exactly what AMD needs to compete.