Greymon55, probably the most talkative leaker on RDNA3 content, has now reported that Navi 31 GPU has been taped out.

According to the tweet, the `next-generation flagship card has been taped out. The tape-out process is an important step in bringing the GPU to the market, but there are still a few steps before the GPU can be brought to the market.

Next generation flagship graphics card has been taped out.

Tape out means that the design has been finished, but the processor can still change as bugs are discovered and fixed through various engineering iterations of the chip. Once the first wafers are produced, AMD will begin testing the chip which will require a lot of time, especially considering that Navi 31 is AMD’s first consumer Multi-Chip-Module (MCM) design featuring as many as two compute dies.

It is not quite clear if both dies are identical and are manufactured on the same wafer, but their configuration is more or less the same. Each features 3 Shader Engines carrying 120 Compute Engines. This means that the full chip is to feature 15360 FP32 shading units, but the Radeon cards based on this silicon may be cut-down to preserve good yields and supply. 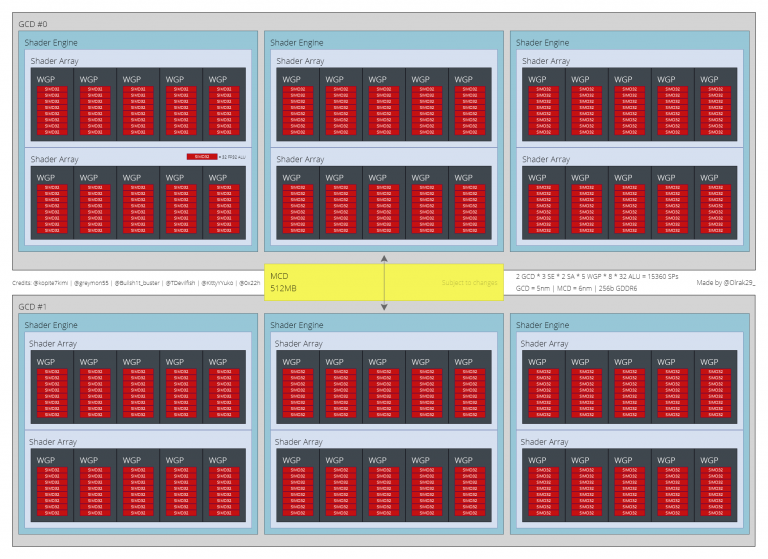 As far as rumors are to be believed, the chip is to be manufactured using TSMC N5 and N6 process technology. Unfortunately, AMD made no comments nor they have released a new roadmap that would ultimately confirm the choice of the foundry and their technology.