In the most recent video from RedGamingTech, a new codename is mentioned supposedly related to the upcoming low-power APU from AMD.

AMD is allegedly planning to manufacture low-power Zen3 APU codenamed “Monet” using Global Foundries 12LP+ node. Monet is supposedly going to replace Dali based Athlon series, although Paul from RGT does mention that those APUs may also end up in devices such as ATMs. This would suggest that this might also be an embedded APU.

These ultra-low-power APUs would feature up to 4 cores and RDNA2 integrated graphics. It would support LPDDR4(X) memory. Olrak was quick to combine all this info into a new diagram (which imitates AMD internal roadmaps from other leaks): 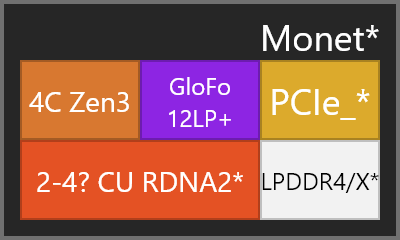 According to Moore’s Law is Dead, AMD is preparing a large EPYC processor. His sources extend on a rumor from AdoredTV who have claimed that Zen4 based server processors will be available in 128-core configuration at some point. Other leakers were not so enthusiastic about this claim, mostly because this mysterious processor was often associated with the 4th Gen EPYC series codenamed Genoa. What was being said is that Genoa is definitely not going to offer more than 96 cores. This is where the new codenamed comes in, Bergamo.

AMD Bergamo is supposedly a 128-core EPYC CPU that launches after Genoa. While the former is supposedly going to compete with Intel’s 3rd Gen Xeon Scalable “Sapphire Rapids”, Bergamo would be targetting competition from Apple and Google somewhere in late 2022 or early 2023. Furthermore, it is said that the CPU would be SP5 socket compatible, why may explain why we have seen some renders featuring more compute tiles on SP5 packages before. AMD Genoa and Bergamo may look pretty the same on the outside, but they are not the same products. 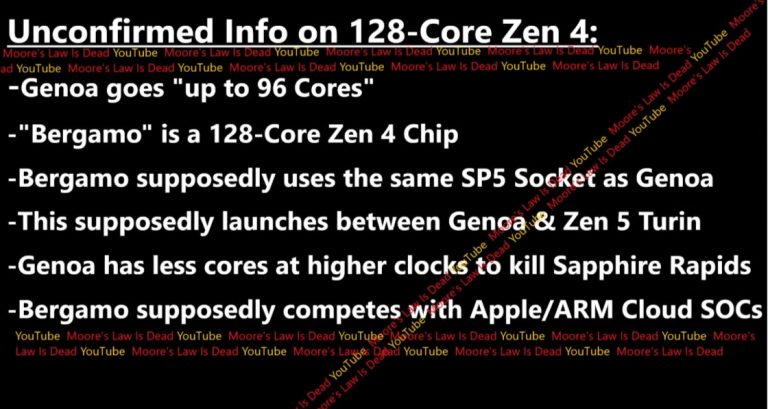 Overall, there have been as many as three mockups of SP5 based EPYC processors so far: