Today’s announcement is not for the ultra-premium Navi21 based model as we speculated a few days ago, but actually completely the opposite. The Radeon PRO W6400 is a Navi 24 graphics card with a TDP of up to 50W. It is actually AMD’s first-ever 6nm workstation card, following the launch of the Radeon RX 6500XT and its mobile variants.

The card is equipped with 768 Stream Processors, which means it’s cut-down silicon similar to Radeon RX 6400 (only being sold to OEMs). The W6400 features 4GB GDDR6 memory across a 64-bit memory bus. 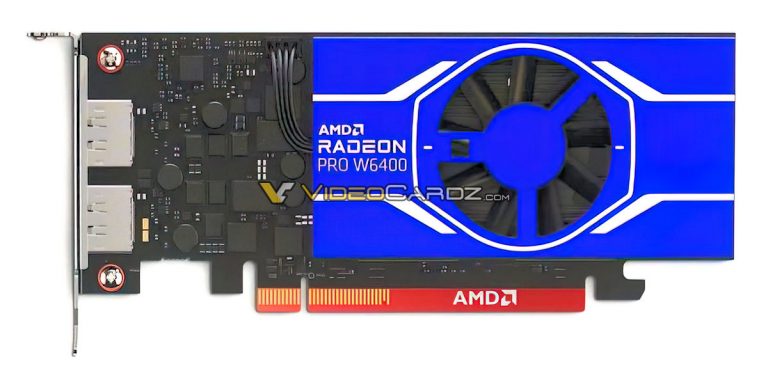 Although this model has a full-sized PCIe 4.0 slot, only four lanes are wired to the GPU, the same problem is present on the gaming RX 6500XT model. This might be a bottleneck on PCIe 3.0 systems.

AMD already launched its higher-end Apple Mac exclusive PRO W6000X series, while the ‘original’ lineup only features three SKUs: W6800 with Navi 21, W6600 with Navi 23, and now W6400 with Navi 24. The only missing part in AMD’s workstation lineup is the Navi 22.

We are not aware of the W6400 encoding/decoding capabilities yet, the same goes for the price. The first reviews of the Radeon PRO W6400 should go live later today.