Last year AMD’s announced that the first technology to be included in an open-source initiative known as FidelityFX is Contrast Adaptive Sharpening. Today AMD confirmed that another four technologies will be included in the free software stack for developers.

The announcement came at the same time as a new GPUOpen website has been launched. The technologies include: 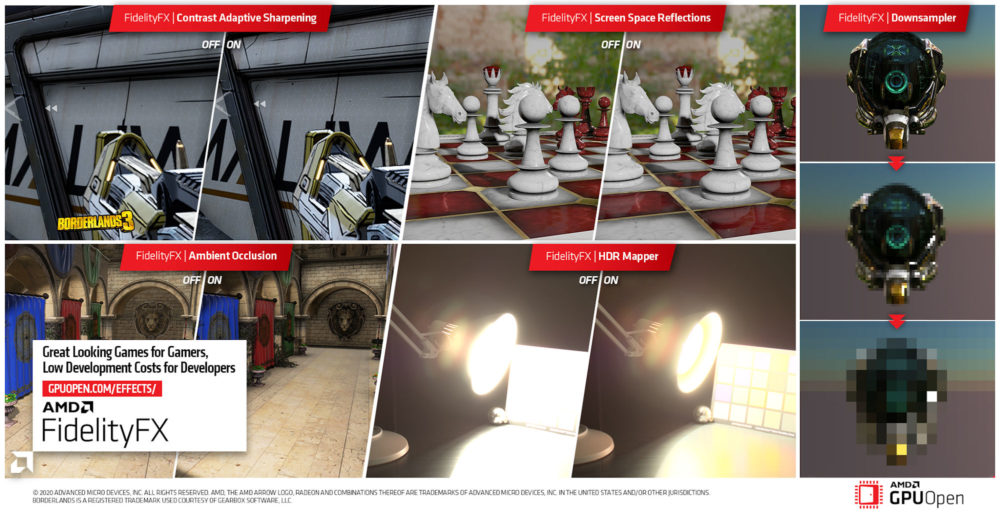 Today, we are excited to introduce you to the new additions to the FidelityFX family. As many of you will know already, FidelityFX was announced last year with the first of our open source effects, Contrast Adaptive Sharpening (CAS). Since then we’ve been absolutely delighted to see the community embrace CAS and FidelityFX.

FidelityFX CACAO stands for Combined Adaptive Compute Ambient Occlusion and is based on Intel®’s Adaptive Screen Space Ambient Occlusion, however our team has been busy tinkering and optimizing it. First of all, we moved the entire thing over to compute, allowing you the freedom to run it on either a compute or graphics queue. We’ve also done some major surgery on the data-transformations the effect undertakes. Finally, we also included an upsampler option to allow you to get high quality ambient occlusion within a budget that suits your game.

Ensure all that effort you put into lighting and shading your scenes is nicely carried through to the screen. FidelityFX LPM (Luminance Preserving Mapper) provides fast and easy-to-integrate HDR and wide gamut tone and gamut mapping for your game.

Almost every game will need to downsample something at some point. Perhaps you’re moving a buffer to a lower resolution for performance reasons, or maybe you’re generating a MIPmap chain. The standard way of doing this is simple, but potentially introduces lots of bubbles into the graphics pipeline. Pop those bubbles by using FidelityFX SPD, our Single Pass Downsampler that can generate up to 12 MIPmap levels in a single compute shader pass.