After nearly 4 months since the first Radeon RX 6000 graphics cards were released, AMD is slowly beginning to talk about its AI-based performance-boosting technology.

During today’s Radeon RX 6700 XT product announcement, AMD has not provided an official update on its ML-based performance improving technology. The company has, however, talked about Radeon Boost, which essentially has the same effect, but at the cost of lower resolution. The FidelityFX SS, on the other hand, is expected to retain a lot more detail from the original image while using an advanced machine learning upscaling algorithm.

NVIDIA’s Deep Learning Super Resolution gives a clear advantage to Ampere and Turing GPUs right now. However, the technology had a bumpy road to success. With the first generation DLSS being mocked for how blurry the games looked when it was enabled. Only after releasing a 2.0 update, it turned into a massive selling point for NVIDIA. The importance of AI-based super sampling is growing as the list of games with raytracing is expanding. Some games couldn’t even be playable with raytracing if not for DLSS.

While AMD had not confirmed when FXSS (not an official abbreviation) will be available, Linus Sebastian (Linus Tech Tips) appears to have more information on the matter. According to his information, AMD will launch the technology when it is ready for all platforms with RDNA architecture. AMD wants this technology to be cross-platform in every sense of the word, the YouTuber claims. What this means is that it would launch simultaneously for Radeon RX graphics cards, Xbox Series, and Playstation 5 gaming console. We do not know if this information was provided exclusively to LTT or was part of the pre-event NDA briefing.

Apparently, rather than rushing [FidelityFX Super Resolution] out the door on only one new top-end card, they want it to be cross-platform in every sense of the word. So they actually want it running on all of their GPUs, including the ones inside consoles, before they pull the trigger.

It would’ve been nice to have it ready by the time the cards launched, but as we saw with Nvidia’s DLSS 1.0 versus DLSS 2.0, it could be for the best.

AMD’s implementation is supposedly based on DirectML API, part of the Windows Machine Learning Library. This library can be used for more than just Super Resolution and can be easily ported to Xbox. It is unclear how would FXSS be implemented for PlayStation 5 though. Fortunately for AMD, both consoles use RDNA-based GPUs, and fortunately for PC gamers, it could mean that the technology will be polished for launch across all devices. 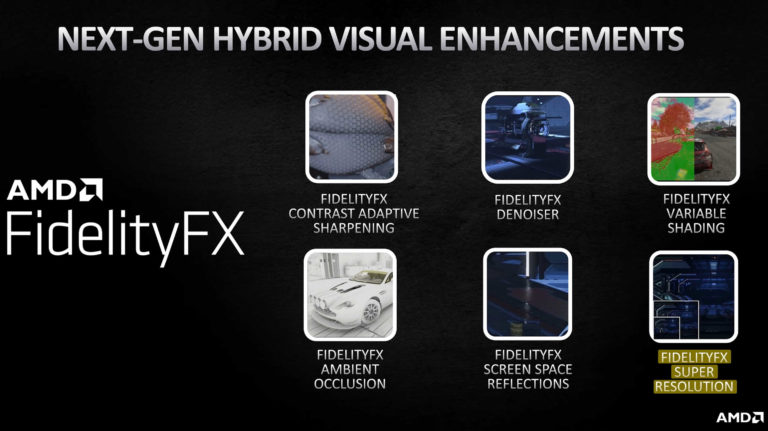