It has been more than two years since NVIDIA introduced its Deep Learning Super Sampling technology. At first, it was mocked for how blurry the games looked liked with the DLSS enabled, but the second revision of the technology has significantly improved the quality. At this point, most users would rather use DLSS and sacrifice almost indistinguishable image quality in favor of a much higher framerate. Some games such as Cyberpunk 2077 are almost unplayable at 4K with ray tracing enabled, unless DLSS technology is enabled.

At Radeon RX 6000 series launch AMD made a promise it will launch its own version of the AI-powered super-resolution technology. The company has not provided any details whatsoever on how would it work or when exactly should we expect it to be available. AMD has only hinted it could be based on Microsoft DirectML technology, but at the same time AMD revealed that its DLSS competitor would launch as a part of the FidelityFX technology package. Thus, it is unclear if AMD has plans to stick to DirectML and push the gaming market into a single standard, or rather create their own implementation that will require collaboration from game studios. The slide from AMD does however suggest it might be the latter option: 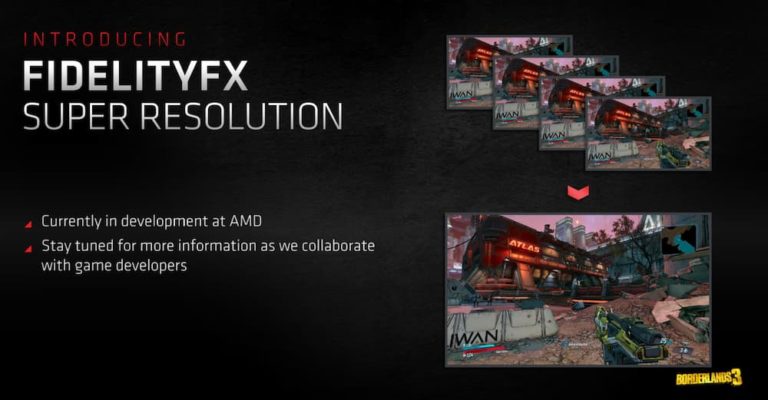 According to Prohardver, AMD now plans to launch its big driver update somewhere in this spring. This means that at the earliest we might hear more about the FFSS in March. The report claims that the big driver update would provide an update on two of the resolution-based technologies: FidelityFX SR and Radeon Boost.

AMD Radeon Boost does not utilize machine learning algorithms to boost framerate. Instead, the technology dynamically changes the resolution during faster-paced gameplay. What this means is that when there is a lot of movement the resolution will be adjusted and the performance will improve. This technology is relatively an easy way to increase framerate, but at the same time, it may lead to inconsistent performance during gameplay.

A new implementation of Radeon Boost that would launch with the new driver is said to offer a higher quality image by dynamically adjusting the resolution only on the fast-moving parts on the screen. By comparison, the current implementation affects the whole frame. This would, for instance, solve the problem of lower quality weaponry in first-person shooters during fast-paced shooting.

An alternative was developed by Sapphire, which is called TriXX Boost. Unlike Radeon Boost, the resolution change does not happen dynamically. Instead, the application creates a custom resolution for the system and uses Radeon Image Sharpening technology to increase the quality of the image. Therefore it produces a more consistent performance increase but at the cost of lower image quality which is then artificially improved with sharpening filters, not AI algorithm.

If AMD is indeed planning a new driver this spring, then we shall be hearing more about this technology from AMD soon.