The full specifications and performance estimates of AMD Genoa CPUs have now been leaked by Moore’s Law is Dead.

It appears that AMD is planning as many as 18 SKUs in the EPYC 9004 series, the flagship data-center processors based on Zen4 microarchitecture. The series feature up to 96 cores and 192 threads and have maximum default TDP at 360W, although they can be configured up to 400W.

The leak from MLID focuses on the EPYC 9004 series divided into different categories, focusing on core performance or density optimizations. The flagship SKU called EPYC 9654 is said to offer 96 cores, 360W TDP and boost clock up to 3.7 GHz. On the other side of the spec table is 8-core EPYC 9174F with just 16 cores and TDP at 320W, although some SKUs will operate at even lower 200W.

The slides leaked by MLID compare AMD Genoa series to 3rd Gen Xeon Scalable series. The mentioned 96-core EPYC processor offers up to 2.6 times better performance than Xeon Platinum 9380. It is also almost twice as powerful as EPYC 7763 Milan with 64-cores, which is 1.4x faster than Xeon. 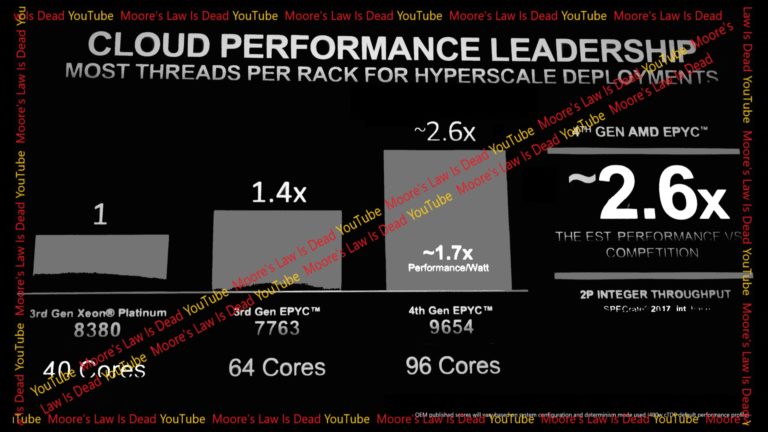 The YouTuber posted a performance chart from SPECrate 2017 Integer_Base Benchmark featuring almost all SKUs from said lineup.  The fastest EPYC processor (9654) scores around 1600 points, which is four times as fast as EPYC 9124 (16-cores). 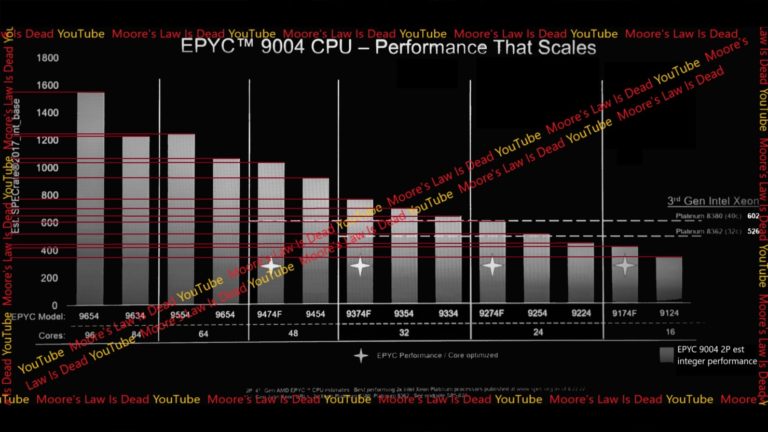 AMD has not confirmed the launch date of EPYC 9004 series, but new CPUs are expected to hit the new servers later this year. The company is also set to launch Zen4c based Bergamo series and later Genoa-X series with Zen4 cores equipped with 3D-VCache. Those are not part of this leak.

The Zen4 architecture will support new DDR5 memory technology (up to 4800 Mbps) and PCIe Gen5/CXL 1.1 standards. New processors will also require new motherboards and will not be compatible with existing AMD Milan/Rome systems.