Robert Hallock, Technical Marketing Manager for AMD, confirmed on official Discord channel what would be the best memory configuration for Ryzen 7000 series.

For Ryzen 7000 series, the best choice for DDR5 memory would be 6000 MT/s. By sweet spot, Hallock understands the best cost, stability, performance, availability, and ease of use. Furthermore, users should look for two module kits because four, although supported, will make it hard for signal routing to reach integrity, compromising the maximum performance.

AMD confirmed their Ryzen 7000 series support DDR5-5200 memory for single-rank and dual-rank with one DIMM per channel configuration. By using two DIMMs per channel, the officially supported speed drops to 3600 MT/s:

Although it was reported that X670 motherboards support maximum FCLK up to 3000 MHz, the default configuration is 1733 MHz. If Robert’s words are to be considered, users should not modify FCLK and leave it on AUTO. He notes that for Ryzen 7000 series the 1:1:1 ratio for FCLK, UCLK and MCLK are not as important as before. To optimize their systems, users should overclock memory modules and controller in 1:1 mode. Well-performing Ryzen samples may hit 2000 MHz FCLK, but such configurations were not prioritized by AMD. 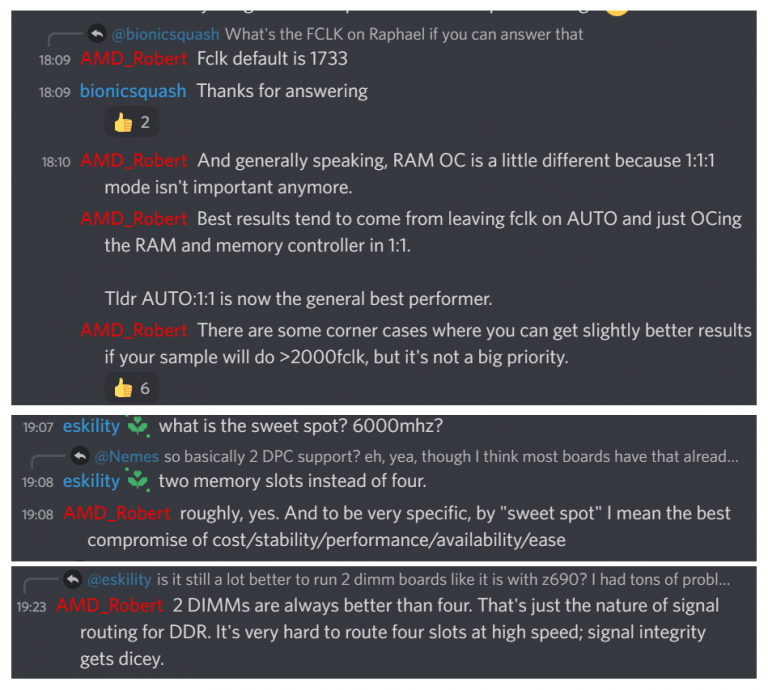 AMD Ryzen 7000 series will hit the shelves on September 27th and so will X670 motherboards. Memory manufacturers are now revealing their kits featuring AMD EXPO (Extended Profiles for Overclocking).