AMD confirms Ryzen 7000 is up to 16 cores and 170W TDP, RDNA2 integrated GPU ‘a standard’, AI-acceleration based on AVX512 instructions

Over the past few days AMD’s Robert Hallock (Director of Technical Marketing) confirmed new details on Ryzen 7000 series, such the maximum core count and TDP. This information was not included into Computex 2022 keynote, or rather, was not attached to Ryzen 7000 specifically.

AMD Ryzen 7000 will top at 16 cores and 170W TDP. While this is not really surprising, as we have reported on this numerous times, AMD was very reluctant to confirm those details until now. The core count spec were confirmed in TechPowerUP interview, while 170W TDP was mentioned on Reddit. This literally means that 7000 series will already fully utilize both CCDs which, in case you are wondering, are now ‘gold plated’ thanks to a process called “back-side-metallization”. 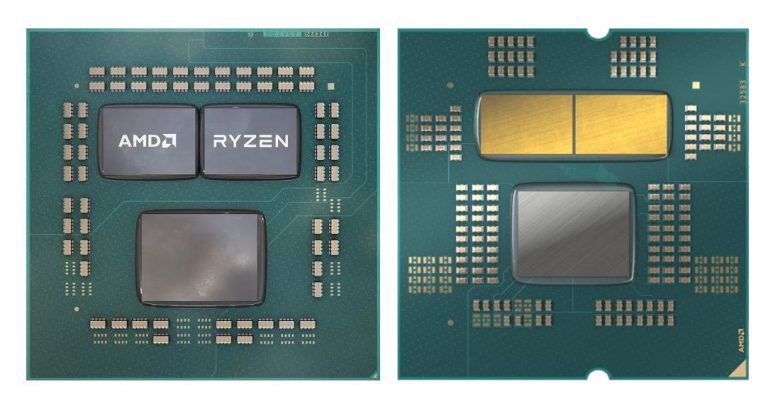 AI-Enhancements are based on AVX 512 instructions

In an interview with TechPowerUP, Hallock also clarified what the slide mentioning ‘Expanded Instructions – AI Acceleration‘ actually means. Those AI-boosting features will rely on AVX 512 VNNI and BLOAT16 instructions (he probably meant to say BFLOAT16/BF16). Those formats are widely used by TensorFlow, AMD ROCm and even NVIDIA CUDA libraries.

Specifically, AVX 512 VNNI for neural networking and AVX 512 BLOAT16 for inferencing. Both are pretty nice speedups, we’re not using a fixed-function acceleration, this could be something we could do with our Xilinx acquisition. We are starting to see more consumer applicability of AI workloads, like video upscaling, which has grown a lot in the last two years. I think there is a general trend for the average enthusiast to take on more AI-type workloads. […]

AMD RDNA2 GPUs on standard on all Ryzen 7000 CPUs

There probably won’t be any Ryzen 7000F series without iGPUs. The RDNA2 graphics which are not in compute dies but in the I/O die will be standard on all SKUs. Those will provide basic display output capability as well as video encode and decode, including AV1. It was previously rumored that Raphael’s RDNA2 graphics may feature up to 4 Compute Units. The specs of RDNA2 iGPUs should remain consistent among all CPUs, Hallock said.

IGP is standard. It’s included on all 6 nanometer IO dies, which has a small number of compute units built in, specifically to enable video encode & decode and multiple display outputs. […] For enthusiasts, it will help diagnose a bad graphics card to get the system up and running when you’re still waiting on the GPU to show up. The iGPU configuration [specifications] are consistent, and all of the CPUs will have it.

AM5 and future Ryzen CPUs (including Threadripper)

In an interview with Forbes/CrazyTechLab, Hallock did not confirm whether AM5 platform is aiming at long-lifespan similar to AM4. After all, AMD did not disclose all details on its new series yet, which is still in the early build up stage.

I don’t know yet – that’s the honest answer. We’re still early in the build up of AM5. It releases in the fall but it’s a long way away. One of the things we want to clear up is what this looks like. Our users expect transparency on this topic. But we just don’t have an answer yet.

Furthermore, Threadripper series ‘are not going anywhere’. This means that we are going to see future Ryzen Threadripper CPUs, possibly based on the rumored SP6 socket. However, the last two generations have shown that AMD is now focusing on the workstation market, rather than enthusiasts.

The new information on TDP/PPT range should also correlate with Ryzen 8000 series, after all, AMD intends to keep socket compatibility for a while. Therefore, we can assume that the maximum TDP of 170W will be kept for Ryzen 8000 series as well.

The Computex 2022 ends today, so AMD is probably done with interviews for a bit, but the company could tell us a more at their Financial Analyst Day in early June.