It has been a while since AMD made any public references to RDNA3, the next-gen GPU architecture for Radeon 7000 series.

AMD Radeon RX 7000 series, a successor to the never-available RX 6000 series should launch by the end of this year. During the 2021 earnings call, AMD CEO Lisa Su confirmed that this year will see several important launches, such as AMD Zen4 CPU architecture and RDNA3 GPUs.

While AMD desktop Ryzen series did not see an update since the introduction of Vermeer, a transition to the new AM5 socket supporting DDR5 memory and PCIe Gen5 standard might also be a great opportunity to upgrade the GPU as well (assuming that they will actually be available). This would be the first time an all-AMD high-end system could be made at (nearly) the same time.

Turning to 2022. Demand for our product is very strong, and we look forward to another year of significant growth and share gains as we ramp our current products and launch our next wave of Zen 4 CPUs and RDNA 3 GPUs. We have also made significant investments to secure the capacity needed to support our growth in 2022 and beyond.

AMD RDNA3 is using an advanced node as per official slides. Unofficially though, RDNA3 will be using TSMC N5 and N6 process technology by combining GPU chipsets on a single die. According to the rumors, the Radeon RX 7000 series will be AMD’s first MCM-based GPU architecture for consumers, following the CDNA2 MI200 accelerators introduced last year. 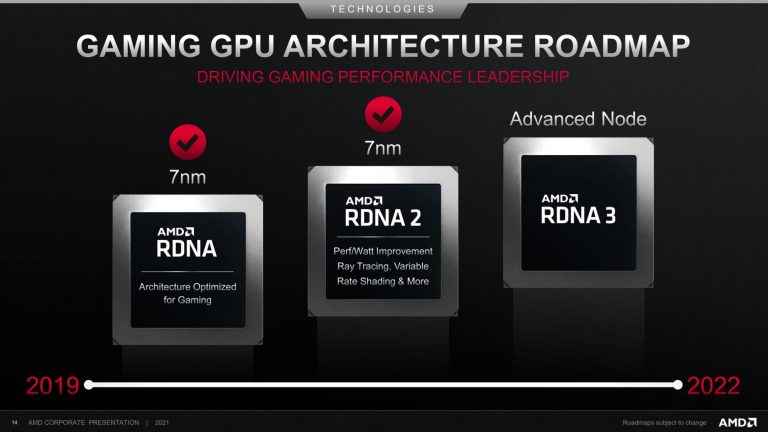 The RDNA3 architecture is (initially?) to feature three Navi 3X GPU designs, offering up to 60 RDNA Workgroups or 15360 Stream Processors by using two GPU dies. It is rumored that there might even be two GPUs with Multi-Chip-Module design: Navi 31 and Navi 32 while the Navi 33 is supposedly a monolithic design.

However, thus far no specifications have been confirmed yet, and there seems to be some speculation about Navi 33 actually being a smaller part than previously thought.

Either way, there is quite a lot going on AMD roadmaps now, but the company did not share any specific dates yet. Also, we are not yet sure if 2022 promises refer to product launches or just their announcements, after all, some of the Navi 3X chips may still see a delay onto 2023.