The upcoming entry-level RDNA2 GPU is now expected in as many as six Radeon graphics cards.

According to the information featured in the latest Radeon driver “21.40.1”, Navi 24 codenamed “Beige Goby” will be used in four mobile graphics cards: Radeon PRO W6500M, Radeon PRO W6300M, and in their gaming variants: RX 6500M and RX 6300M. Those four cards are in addition to already known RX 6500XT and RX 6400 desktop GPUs which are to feature Navi 24 GPU as well.

The driver specifically mentions such products, despite the fact that none of them has been released or even announced by AMD: 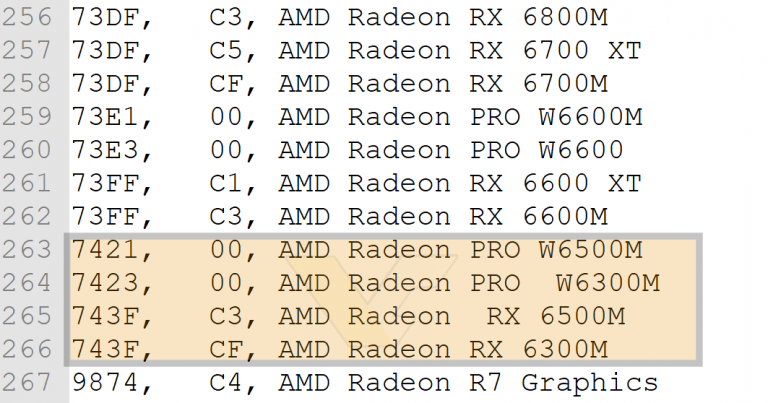 AMD Navi 24 has already been known to carry a PCI Device ID of 7420-743F, as it has been mentioned in Linux kernel/driver leaks before. The GPU is to feature as many as 16 Compute Units in its full configurations (1024 Stream Processors) and up to 64-bit memory bus, enabling 4GB or 2GB configurations.

Since Navi 24 is considered primarily a mobile GPU (due to its low-power requirement), the manufacturer might want to launch its Navi 23 graphics cards around CES 2022 where AMD is also expected to announce its brand new Ryzen 6000 processors codenamed “Rembrandt”.